The Worst Car Wreck I Never Had

Over the weekend I was reminded of the worst car accident I ever had. Almost. It was back when I lived in Los Angeles, which is consistently rated one of the best cities in which to be brutally killed in an automobile.

Let me set the scene. It was May 2013. I was cruising down the 105 freeway. The road in that particular area was six lanes wide with a smattering of traffic spread across it, all going about seventy miles per hour. It was a glorious, sunny spring day. The kind of day when nothing can possibly go wrong.

I should note, this was before I had my totally sweet 1993 Honda Civic del Sol. I never owned a convertible when I lived in southern California. I waited until I moved to the Pacific Northwest for that, because I’m the best at life planning. 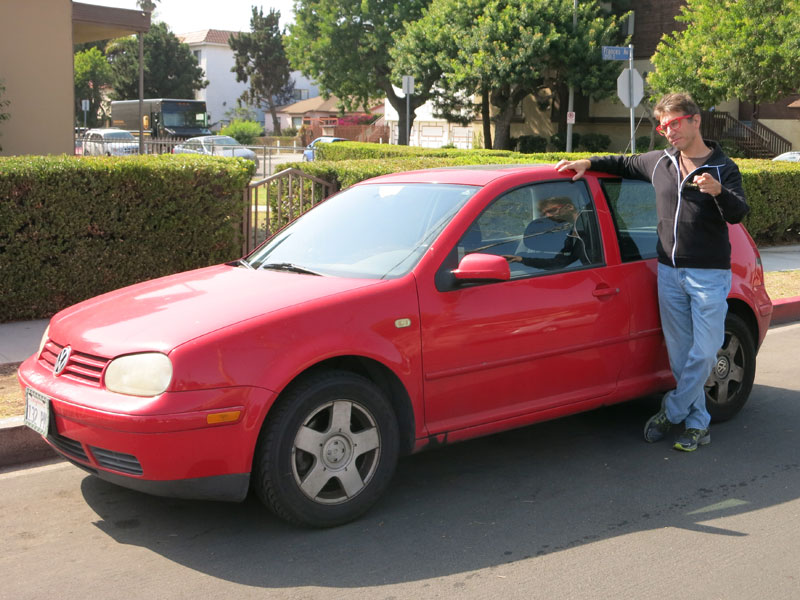 At the time I was driving my fire-apple red 1999 Volkswagen GTI. Because I don’t acknowledge new cars were built after the turn of the century. My lady was by my side. We were probably listening to that hot new jam, the Harlem Shake. But before the beat could drop, our memeworthy moment was interrupted by a screeching chorus of tires against asphalt.

The noise was like a dozen jungle cats tearing each other apart. I knew it had to be four or five cars squealing to an uncontrolled stop, but I couldn’t tell which direction it was coming from. Before I could even take my foot off the gas, Amanda was already pointing at a cloud of burning rubber smoke wafting up from the road about a hundred feet ahead in the next lane to our right.

Just as I began to process the very idea of a multi-car pile-up in progress, this white car came sailing towards us at highway speed, spinning sideways across the lanes in the condition it is here. It was thirty feet in front of me and coming at my front bumper like a renegade cruise missile before my brain even acknowledged it was there. 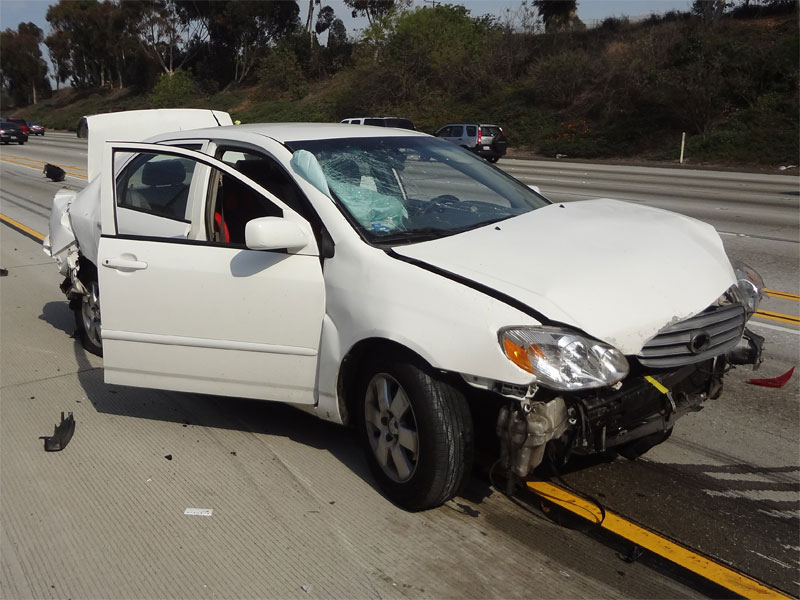 Fortunately, at that time I was a fledgling member of the local men’s flat-track roller derby team, the Drive-By City Rollers. I was spending five or six hours a week on wheels, moving at unsafe speeds while trying to avoid being clobbered by tough guys and even tougher women.

Some deeply ingrained wax-on, wax-off instinct took control, and I stood on the brake and cranked the wheel hard left. My stomach went into an unsettling lurch as the tires screamed against the pavement and the back end of the car passed the front. In an instant we were in a tight spin, still moving at 60+ miles per hour down the freeway.

By the time the rogue car hit me, my car had EXACTLY MATCHED ITS SPIN. I braced for an impact that never happened as the two vehicles barely grazed each other, edging side-to-side and executing an elegant 180 spin together like a pair of choreographed figure skaters.

When I had finally laid a big enough spiral of burnt rubber to come to a complete stop we were turned all the way around, facing directly into the grille of the oncoming semi truck that had seconds before been behind us. I slammed it into reverse and safely maneuvered to the concrete wall at the inside shoulder before that big, slowly-braking bastard could end our lives. 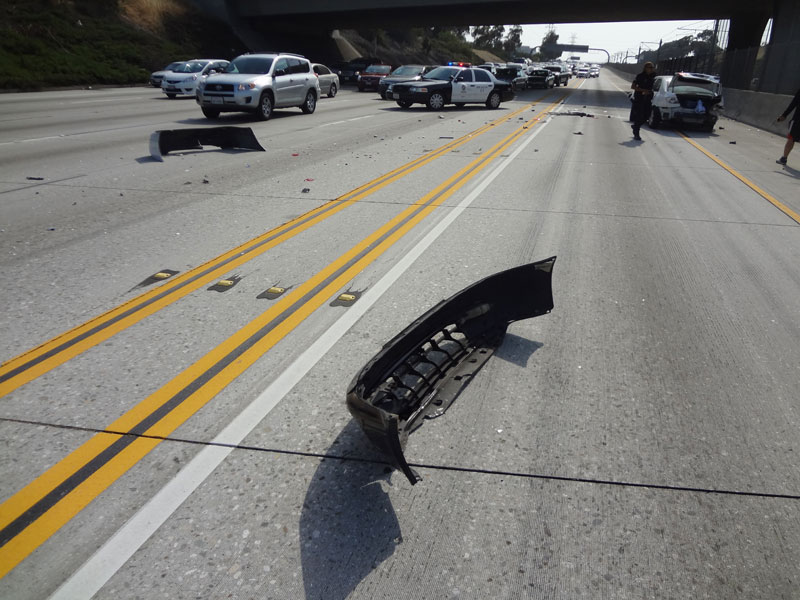 And just like that, it was over. Traffic was already angrily weaving around the debris and continuing on its way. Because Los Angeles.

We got out of the car and checked on the other wrecks. Despite this being a high-speed, five-car accident, there were no fatalities and only minor injuries. The angels of the National Highway Safety Administration were smiling upon the 105 freeway that day.

I felt terrible for those who had lost their cars, but I was vibrating with energy. This energy wasn’t terror or relief. It was that feeling you get when the roller-coaster returns to the station and the only word your frenzied mind can remember is “AGAIN!”

This whole harrowing brush with death could have easily ended in my car becoming a chewed-up, gasoline-spewing metal casket for two. But I didn’t feel the cold hand of the reaper reminding me of my own mortality. I felt like a super hero.

Amanda and I had come out of the pile-up totally unscathed. The car was barely even scathed. It only lost a side-view mirror (while somehow leaving the plastic housing completely intact) and caught some superficial scratches on its rear fender. 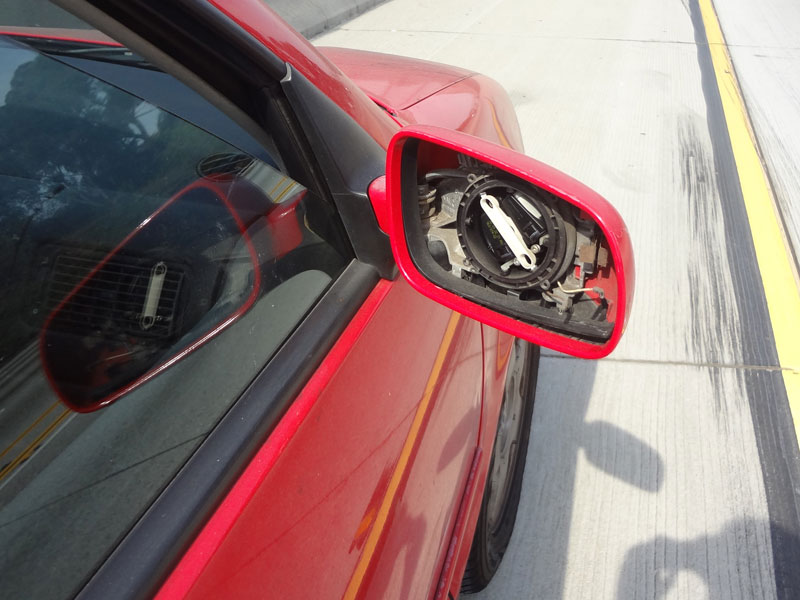 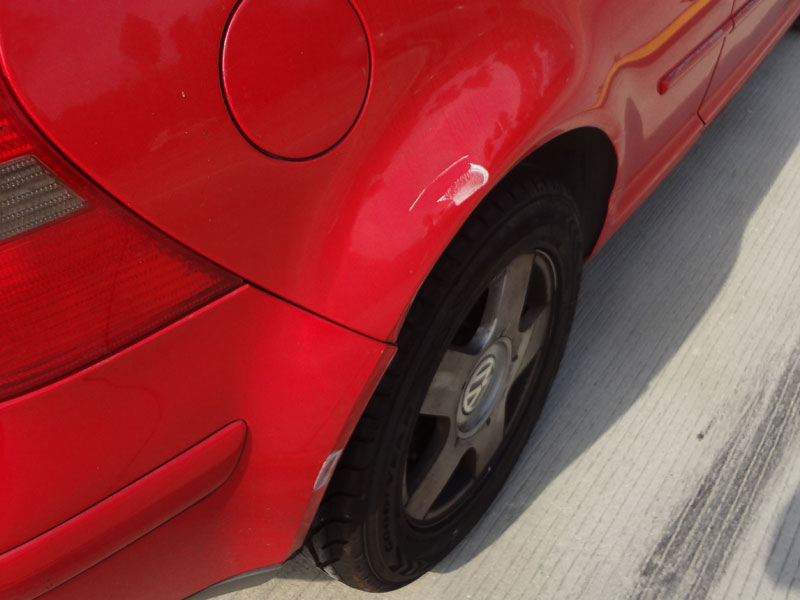 Once we were cleared by the CHP and back on the road, a badly shaken Amanda turned to me and said, “Marcus Alexander Hart, you just cheated death! What are you going to do next?” 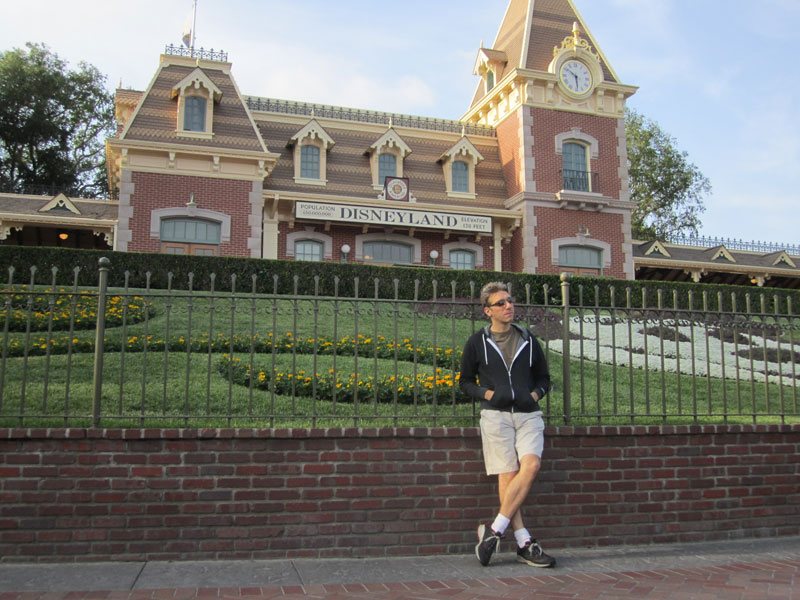 The craziest part of the story is that I had been working long hours at the time, and had neglected my car maintenance to the point the GTI’s brakes had gone soft as a month old tangerine. But just days before the accident, the TV show I was on went on between-season hiatus, giving me a chance to finally get my ailing brakes fixed.

If this incident had happened mere days earlier, the story would have had a very different ending. And someone else would be telling it.

So I guess the lesson to be learned is don’t put off those important car repairs for another day, or that day may never come.

… says the guy currently driving a twenty-four year old beater with a cracked front axle, leaky power steering, and a stopping distance like a freight train full of iron ore.