Set sail on the cruise starship WTF Americano Grande for the complete, four-and-a-half-book saga of Captain Leo MacGavin and his ragtag crew of misfits!

Galaxy Cruise is perfect for readers who love The Hitchhiker’s Guide to the Galaxy and Space Team. And moviegoers who love Galaxy Quest, Spaceballs, and Guardians of the Galaxy. And TV watchers who love Red Dwarf, Futurama, and The Orville. And people who basically just want to see The Love Boat on a spaceship.

PS. If you’ve finished these books already, check out my weird stuff! 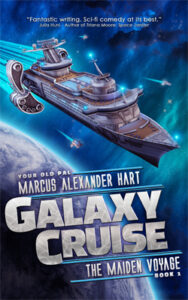 Humanity needed a hero. It got a karaoke DJ.

Leo MacGavin is not the brightest specimen of humanity. But when he inadvertently rescues a flirty alien heiress, he’s promoted from second-rate lounge entertainer to captain of the galaxy’s most sophisticated cruise ship.

Before he can flee in terror, a human-hating executive gives Leo an ultimatum—complete the vessel’s maiden voyage or mankind’s last colony will be turned into a sewage dump. To make matters worse, a militant cyborg is undermining his authority, a giant spider is terrifying the passengers, and a sentient plant keeps stealing all the beer.

If Leo ever wants to see his home again, he’ll have to keep the guests happy through seven days of onboard antics and madcap shore excursions. As strange malfunctions tear the ship apart, can he hold his rag-tag crew together, or will he flush the last bastion of humanity down the crapper? 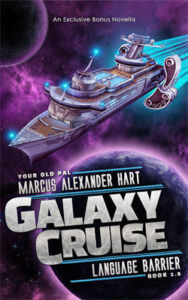 A bonus novella for super fans!

Faced with a galaxy of unintelligible alien guests, Captain Leo MacGavin and his crew need to learn new languages, pronto! But when a cultural misunderstanding threatens the Americano Grande, can Leo save the day, or will the ship be permanently lost in translation?

This free ebook is available exclusively to readers of Galaxy Cruise: The Maiden Voyage. Check the back of your copy to find out how to get it! 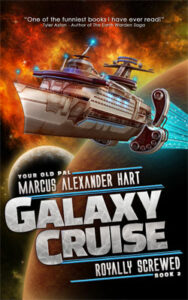 After generations of conflict, an arranged marriage is set to unite two feuding royal families and bring peace to their worlds. But when bungling Captain Leo MacGavin botches the bride and groom’s first meeting, the wedding is off, and so is the truce!

To stop an interplanetary war, Leo needs to make a royal love connection, and fast! But when he seeks help from his confidante Kellybean, he inadvertently sabotages her budding relationship as well. To further complicate matters, his ship is on the verge of catastrophic failure, his first officer is weaponizing the safety gear, and his acting head of hospitality is a sociopath who keeps maiming the guests.

When Leo’s old flame makes a mysterious reappearance, can she help him unite the nuptial-bound nemeses, or is the whole galaxy royally screwed?

Get it in ebook and print

Get the audiobook from Amazon

Get the audiobook from Audible 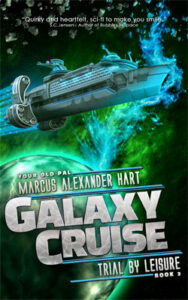 Caught in the ultimate tourist trap…

Exiled in a bizarre galaxy, Captain Leo MacGavin is desperate to find the mythical alien technology that will send his crew home. But when his crush on the ship’s hologram causes him to follow a shady lead, the Americano Grande is trapped by a pair of all-powerful space gods.

Duty-bound to protect their planet, these sexy centurions refuse to allow passage until the crew proves they are a harmless pleasure vessel. Fortunately, all they have to do is show their passengers a good time. Unfortunately, their passengers are a delegation of pregnant aliens with a conceited leader, xenophobic attitudes, and rapidly approaching due dates.

When one of the dreamy deities puts the moves on Leo’s love interest, can he set his feelings aside to save the ship? Can the crew satisfy the moody matriarch and escape the space prison with their lives? Or are they all doomed to fail this diabolical trial by leisure? 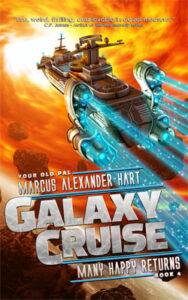 Have your cake and repeat it too…

Thirteen months into his seven-day cruise, all Captain Leo MacGavin wants for his birthday is to finally go home. And when his crew gives him a fully functional starship transporter, his wish comes true. Sort of.

As soon as the WTF Americano Grande returns to its home galaxy, things start to go awry. Leo’s relationship status becomes “more than complicated” as he’s torn between his holographic sweetheart, the woman she was based on, and an old crush who sashays back into his life. Meanwhile Kellybean flames out while introducing her garbagepunk girlfriend to her straitlaced parents, Dilly gets enlisted in the Ba’luxi Prime Imperial Navy, and Doctor Waverlee miffs off the mafia.

Just when things can’t get worse, the crew wakes up to find themselves repeating the same horrible day again. And again. And again. Can Leo fix the spacetime screw-up and stop this broken-record birthday, or will he spend the rest of eternity making many happy returns?

Groundhog Day meets Everything Everywhere All at Once in the madcap, time-looping, multiverse-hopping conclusion to the Galaxy Cruise saga!