Before I found my niche as a comedy sci-fi writer, I tried out a bunch of different genres, many of which do not actually exist.

If you loved Galaxy Cruise and want something kinda similar but also different, here are my “off-brand” classics. I’ve noted why you might like them (and why you might not).

I hope you find a new favorite in the weird stuff! 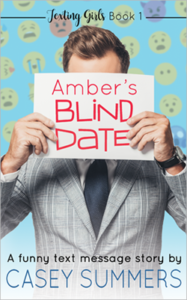 Why Galaxy Cruise fans will like it: Because it’s written in text messages, the whole thing takes about an hour to read, and it’s flippin’ hilarious. The joke density in this book is staggering.

Why Galaxy Cruise fans won’t like it: Honestly, I think you’ll love this one.

College sophomore Amber Meadows is terrible at relationships. So when she goes on a blind date with Kevin (who is impossibly cute, charming, and actually, literally blind) she’s terrified she’ll screw up her new romance before it even begins.

Desperate for backup, Amber secretly texts her two besties for advice on how to win Kevin over. Nora is level-headed, quick-witted, and highly (almost scarily) intelligent. Celery is quirky, impulsive, and does not have one single F to give. They never agree. On anything. Ever.

When a mysterious woman kidnaps Kevin at gunpoint, Amber’s date turns into a madcap adventure filled with incompetent drug dealers, psychotic trivia masters, and one super pissed-off waiter. With Nora and Celery’s help, can Amber win Kevin’s heart? Or at least get them both to the end of the date alive? 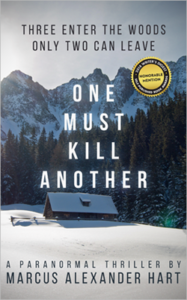 One Must Kill Another

Why Galaxy Cruise fans will like it: This book shows my “serious side,” in that it deals with adult themes, but it isn’t full grimdark. An apt reviewer said, “It’s funny as hell, and has teeth.” I consider this my most literary novel, and I’m really proud of it.

Why Galaxy Cruise fans won’t like it: Though it has funny moments, it’s not a true comedy. It’s a real-world story with real-world characters dealing with real-world problems (on top of otherworldly problems). And there’s swearing and some violence.

Any two can leave the woods alive, but only after they murder the third…

Failed sitcom writer Matty Savage would do anything to get back together with his ex-wife. After all, marrying Kimberly Savage—the hottest vampire-slaying movie star of the 1990s—was the greatest achievement of his life. A life that took a nosedive after she divorced him thirteen years ago.

Their daughter, Rebecca, is a twenty-three-year-old personal trainer in financial trouble. A loan from her millionaire mother is all she needs to put her life on track, but the scar slashed across her face is an ever-present reminder of why she turned her back on her parents forever.

When an aging, sentimental Kimberly invites her estranged family for a getaway at her secret cabin in the mountains, Matty hopes their reunion will open her heart. Rebecca just hopes it’ll open her checkbook.

The homecoming goes from awkward to deadly when the Savages are trapped by an ancient evil with an ultimatum: Any two of them can leave the woods alive, but only after they murder the third.

As the family confronts their demons—both figuratively and literally—old grudges are rekindled and dark secrets are revealed. Tense alliances form and shatter as each person decides who’s to blame for the horrors of their past. And who deserves to die for them.

Fast-paced with a twist of dark humor, One Must Kill Another is a savage family reunion.

“The pacing is strong as the surprises come fast and furious.”

“Imagine Stephen King writing a ’90s sitcom and you’re almost there, but not quite: This book is far more complex.”

“A roller-coaster ride of humor and horror and heartbreak that is hard to compare to anything else.”

Who will survive the weekend? Get your copy and find out today! 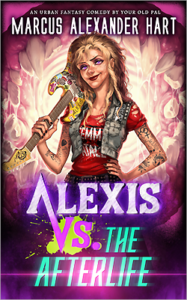 Alexis vs. the Afterlife

Why Galaxy Cruise fans will like it: It shares the same kind of comic sensibility and well-developed characters. If you love Jassi Kiktrash, you’ll love Alexis McRiott.

Why Galaxy Cruise fans won’t like it: SO MUCH SWEARING. If you don’t like f-bombs, steer clear.

Alexis is dead. But that won’t stop her from becoming a hair-metal superstar.

When teen metalhead Alexis McRiott is killed in a freak accident, her ghost manifests unexplained magical powers. Thinking she can use them to resurrect herself to the rock-star life of her dreams, she kinda sorta accidentally releases an ancient evil bent on raising an army of poltergeists to slaughter the world of the living. Oops. Party foul.

Racing against the clock, Alexis teams with a badass Asian cowgirl and an overzealous medieval prince to learn the truth behind her mysterious powers and prevent a full-blown paranormal apocalypse. But can this foul-mouthed burnout charm the girl, save the world, and still prove she has what it takes to rock an arena show?

She doesn’t stand a ghost of a chance.

“If We Sold Our Souls by Grady Hendrix was made into a straight-to-tv movie on the Disney Channel this is what would happen. I loved it!”

“It made me literally laugh out loud more than once. It was simply a fun romp, an escapist fantasy that left me wanting more.”

“This was a hilarious, quick and enjoying read. If you need a break from dramatic, serious fiction, this is a great palate cleanser.” 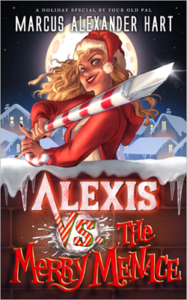 Alexis vs. the Merry Menace

Genre: Insane Christmas-special action adventure (Get it free in ebook and crappy audiobook!)

Why Galaxy Cruise fans will like it: This book is short and really funny, if you don’t mind swearing and hardcore irreverence.

Why Galaxy Cruise fans won’t like it: Foul language and some cartoonish but bloody violence.

Can a foul-mouthed metalhead save Santa from a rampaging demon? He doesn’t stand a snowball’s chance in Hell.

When Krampus threatens Santa’s life, the jolly old elf needs a magical bodyguard with focus, integrity, and ruthless efficiency. What he gets is a slacker sorceress, her ghostly Chinese railroad-worker girlfriend, and a dead medieval prince.

In other words, Christmas is doomed.

Packed with magic gone awry, fast-paced antics, and occasional bouts of gratuitous violence, Alexis vs. the Merry Menace is an action-adventure Christmas comedy that remembers the true reason for the season.

Presents. The reason is presents.
Get it now 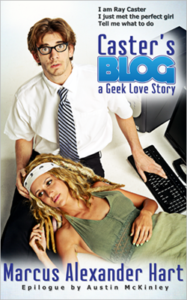 Why Galaxy Cruise fans will like it: It has a lot of geek humor and characters you may deeply relate to. While the story is a romance, it’s not a “romance novel.” That is, there’s no sex in it.

Why Galaxy Cruise fans won’t like it: It’s a weird thing that I wrote online almost twenty years ago. I don’t know, man. It is what it is.

Ray Caster is too awkward to talk to people in the real world. Instead, he pours his heart and soul into a blog about movies, office drama, and Star Trek reruns. So when he meets Shadoe Moon Beaupre—literate, beautiful, and basically the coolest, most perfect girl he can possibly imagine—he has no idea how to get her attention. Caster needs a crash course in romance, so he turns to his online followers for advice on how to overcome his crippling social anxiety and win the heart of his dream girl before she beams out of his life forever.

The blog posts in Caster’s Blog: A Geek Love Story were written online in real time over the course of one year. None of Caster’s followers knew he was a fictional character until the publication of the first-edition of this book. Come for the story, stay for the social experiment!
Get it now 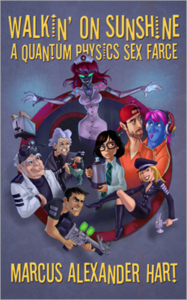 Genre: Script to a sci-fi sex farce for the stage (Get it free!)

Why Galaxy Cruise fans will like it: It’s a madcap, totally silly, sci-fi adventure in the style of Three’s Company. Despite being classified as a “sex farce” there’s no on-page sex, but a lot of cheeky innuendo.

Why Galaxy Cruise fans won’t like it: It’s not actually a novel, but the script to a stage play.

When a doomsday weapon falls into the hands of a psychotic 184-year-old woman, the galaxy’s only hope for survival lies with a slacker satellite repairman, a nerdy co-ed, a forgetful blue alien, an unhinged infantry grunt, a lecherous mad scientist, and a buxom military commander with a secret agenda.

As diplomacy is eclipsed by desire, their desperate peace conference quickly devolves into a madcap, space-age bedroom farce. To further complicate matters, this lusty bunch of misfits are bedeviled by a malfunctioning time machine and a rogue surgical droid that keeps swapping their brains! Can they make sense of their shuffled identities and mangled timelines before they trigger a galactic apocalypse?

Geeky, sexy, and relentlessly silly, Walkin’ on Sunshine is like an episode of Three’s Company written by Stephen Hawking!