Did you know that I wrote a series of children’s books under the pen name M.K. Radican?

Zombie Reconstruction Squad is a complete, four-book series of hilarious, irreverent mysteries perfect for fans of Big Nate and Captain Underpants. Designed for reluctant readers age 8 to 12, the stories focus on humor while building critical thinking skills. Each book is a standalone mystery that contributes to a larger story, keeping kids engaged through the whole series.

If you’ve got little booger-eaters looking for a laugh, check ’em out!

“M.K. Radican is as funny as Dav Pilkey!”

“I thought [my kid’s] head was going to fall off, he was laughing so hard. He came to me frequently to show me the funniest parts.”

“The humor was really funny and the mystery unraveled so well!”

“My 11-year-old was willingly putting down his Switch to read this, which is pretty huge for him.”

“The story had plenty of laughs, especially if your kids are like mine and they are at an age where anything booger, fart, or stinky is funny.” 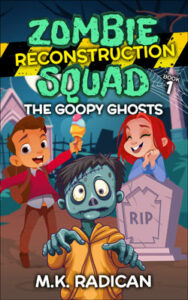 When the town of Pootville is attacked by a bunch of booger banshees, Emilio Montanio and his wacky pal Rochelle “Roach” Riggs have to stop the spooks before they slime the city!

Things get even weirder when they meet Urg, a little zombie with a big problem. He sneezed so hard he blew his nose right off his face. And whoever found it is using it to make the goopy ghosts!

To stomp out the snotty specters, Emilio, Roach, and Urg will have to solve the mystery of the stolen schnoz. Fortunately for them, Pootville has no shortage of local weirdos to investigate.

But can they sniff out the snout, fix Urg’s face, and beat the boogery boogeymen? S’not a problem for the Zombie Reconstruction Squad! 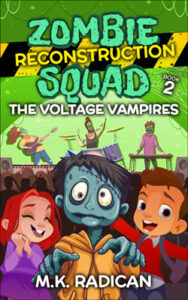 High-voltage horrors lurk in the darkness! Don’t get fang-fried!

When voltage vampire bats suck up all the electricity, it’s lights-out for the town of Pootville! To make matters worse, Urg the kid zombie has lost another body part, and he doesn’t even know what it is!

To end the blackout, Emilio and Roach will have to figure out which piece Urg is missing and who’s using its magic to create the sparking spooks. Could it be the undead heavy metal band? Or the frustrated astronomy club? Or a trio of costumed weirdos with a strange tooth-fairy obsession?

It’s up to the Zombie Reconstruction Squad to eliminate the electrical enemy before Pootville goes dark forever! 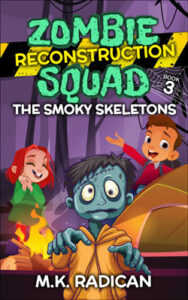 Spooky skeletons will keep you up all night!

When Emilio throws a sleepover, sinister skeletons made of greasy black smoke cause a pajama-party panic! The bony beasts frighten everyone in Pootville out of their beds and into the streets!

While the scared citizens stay safe in a 24-hour diner, Emilio and Roach venture into the night to help Urg find his missing zombie body part and stop the smoky spooks. But can they thwart the thief and beat the boneheaded bad guys?

The Zombie Reconstruction Squad will have to pull an all-nighter to put this case to bed! 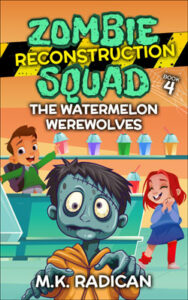 Guard your pets! No one is safe from these ferocious, fruity freaks!

With the town of Pootville under constant attack by maniacal monsters, Emilio’s neighbors get puppies to protect their property. But the canines can’t fight off an invasion of weird watermelon werewolves!

Soon, Emilio, Roach, and Urg are in double trouble when the monster melons steal the pets they’re dogsitting! Now they need to find lost dogs and lost zombie parts, before it’s too late!

Can the Zombie Reconstruction Squad solve the mystery, stop the seedy savages, and fix Urg’s decomposing body once and for all? Find out in their final epic adventure! 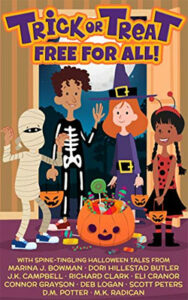 Trick or Treat: Free for All! – A totally FREE anthology!

Join your favorite kidlit characters as they embark on a night of trick-or-treating you’ll never forget! This collection of short stories will take you to spooky neighborhoods, back to ancient Egypt, and even inside a video game! Featuring tales from award-winning authors and fresh new voices, this is a perfect Halloween treat for readers ages seven to twelve!

This book features a completely ridiculous story featuring the Zombie Reconstruction Squad, a candy binge, and a really great scare.

Grab your copy today, and have a happy Halloween!