How I got a ’90s beater into a classic car show

This is a story about asking for it.

It all started when we moved back to the USA after our exile in the United Kingdom. One of the first adult responsibilities I had to take care of was buying myself a car.

Living in semi-rural Oregon, there were a few key things to take into account when choosing an appropriate vehicle. First, of course, is the weather. It rains here. A lot. A lot a lot. Like, for a good part of the year the roads are basically flat boring waterslides. In the winter it freezes. Or turns to snow and shuts down the city for weeks at a time like some kind of Ned Stark warning come horribly true.

So a wise choice would be to get a car with high ground clearance and four-wheel drive. A truck or SUV, like literally every single one of my neighbors has. If I wanted to really fit in, maybe I could even get some bumper stickers about how great guns are.

So I did some research and test drove a few hardy working-stock vehicles. I took careful notes on fuel economy and long-term reliability. I asked for opinions in online car forums. I made charts and graphs and weighed pros and cons.

Then I saw this car on Craigslist and immediately bought it because I am the worst adult ever. 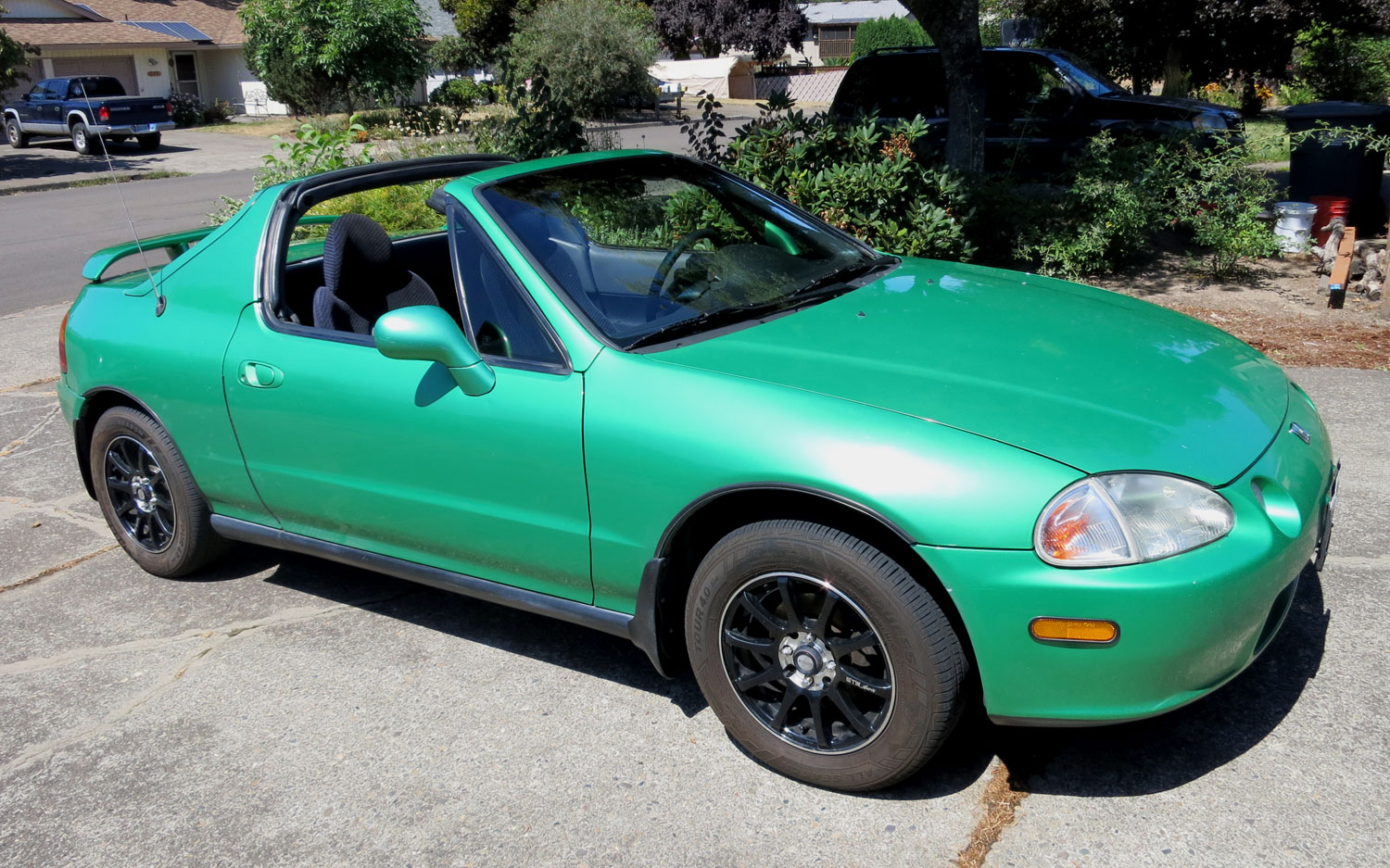 And that’s how I came to be the half-proud/half-ashamed owner of a 1993 Honda Civic del Sol convertible.

This car has exactly nothing I was looking for. It’s not four-wheel drive. The top leaks when it rains. And it’s got the ground clearance of a Jack Russell Terrier.

If you’re not yet convinced this was a questionable life choice, add in the facts that it predates the Nintendo 64, has airbags that expired over a decade ago, and has enough miles on the odometer to have circumnavigated the equator eleven times.

But, come on. How was I supposed to not buy this car? LOOK AT HOW GREEN IT IS.

Over the past year, I’ve discovered there are a few small challenges to driving a car that’s basically a toy built during Bill Clinton’s first one-hundred days. For example, things randomly stop working for no apparent reason, like the door locks, and the tail lights, and the brakes. Then there’s the fact that this thing is about as tall as a high-pile carpet. Ford Fiestas tower over me in traffic.

But the biggest issues I’ve had with the del Sol are psychological. I mean, this car is awesome. If you’re a blonde teenage girl on Beverly Hills 90210. If I were Jennie Garth I would rock this car.

But as a 40-something man in 2017, using a 24-year-old convertible as a non-ironic daily driver sometimes makes me feel like I’m trying to have a midlife crisis but am too big of a failure to even pull that off properly.

I needed to do something to make my car feel awesome again.

Maybe that thing had been right in front of me all along.

Every Tuesday night during the summer, Hillsboro holds the Tuesday Night Market: a street fair full of music and food trucks and a little bit of produce. One of the attractions of the market is the weekly “Crusin’ Tuesdays” car show. Dubbed “a street of classic car dreams,” local car collectors bring out their gleaming chrome-and-steel pride-and-joys to wow the crowds every week. 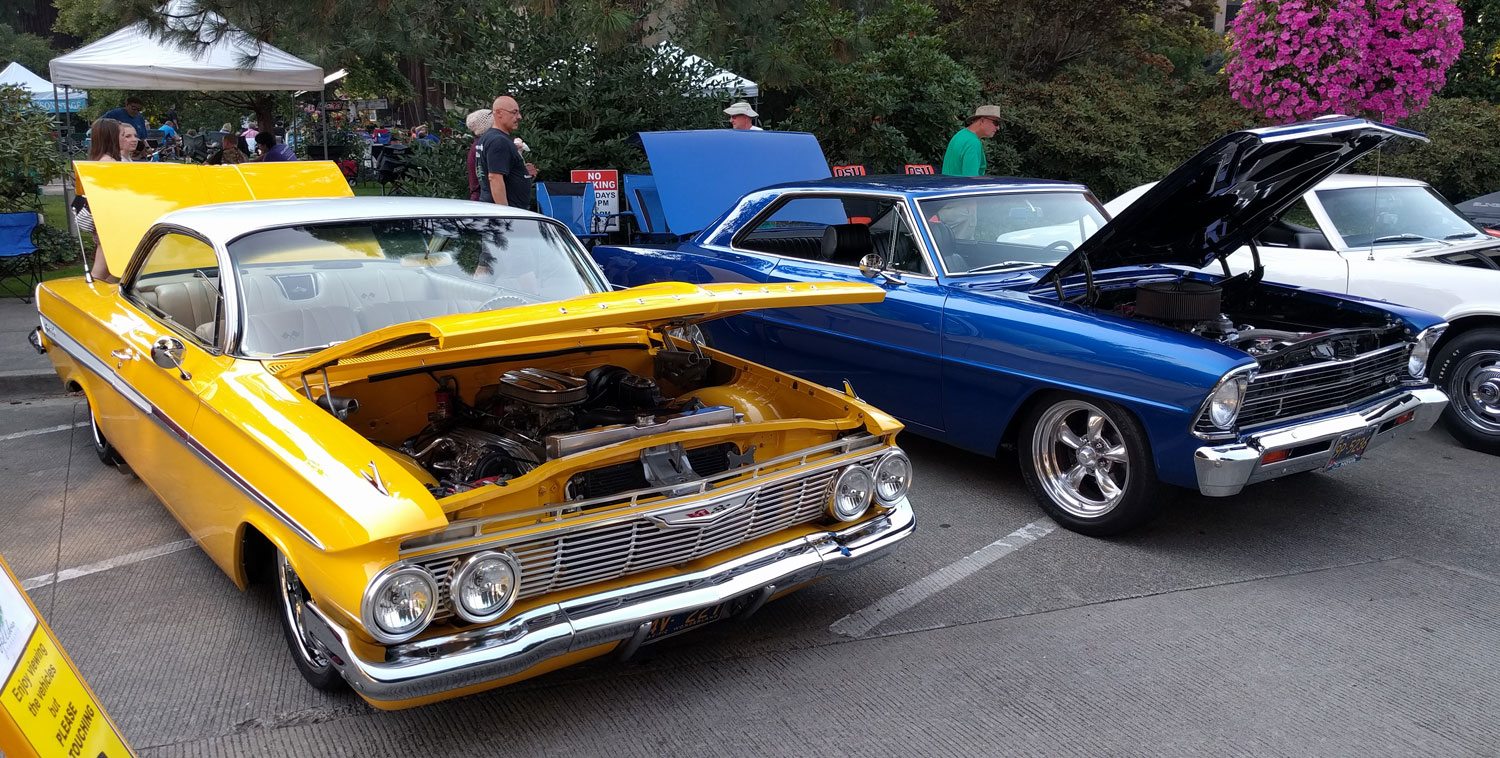 According to their website there are a few criteria a vehicle must meet to be accepted into the show. New cars can be entered if they’re “custom or rebuilt specialty cars.” For the oldies, “Your car needs to be considered a ‘Classic,‘ ‘Antique’ or ‘Hot Rod’ as defined in the ‘car’ world; at least twenty years old, restored, refurbished, altered or otherwise in the process of becoming a ‘sweet’ ride!”

I’ve wanted to enter my del Sol, but I never have. Because I was afraid.

I was afraid this gang of gearhead WWII veterans would take one look at my rattling ’90s jalopy and turn me away. More than that. I was afraid they’d actually get angry at me for trying to ruin the integrity of their car show. Like I was mocking them by implying that I was fit to sully their showcase of tail fins and suicide doors with a mildewed throwback to the age of Zima.

With twenty minutes left before the end of registration, I decided it was time to ask for it.

But my car was in no condition to enter a car show. I mean, besides all the stuff I’ve already mentioned, it was also filthy. I hadn’t washed it since… I think ever. Because, as I said before, it leaks when it gets wet. But this was the time to go bold or go home.

As the minutes ticked by I raced to the automated car wash. Before the attendant ran me through the wash, she reminded me to push down the long, manually telescoping radio antenna. Because that’s a thing my car still has in 2017. And then I was rolled into the mystical Gauntlet of Leak Discovery. 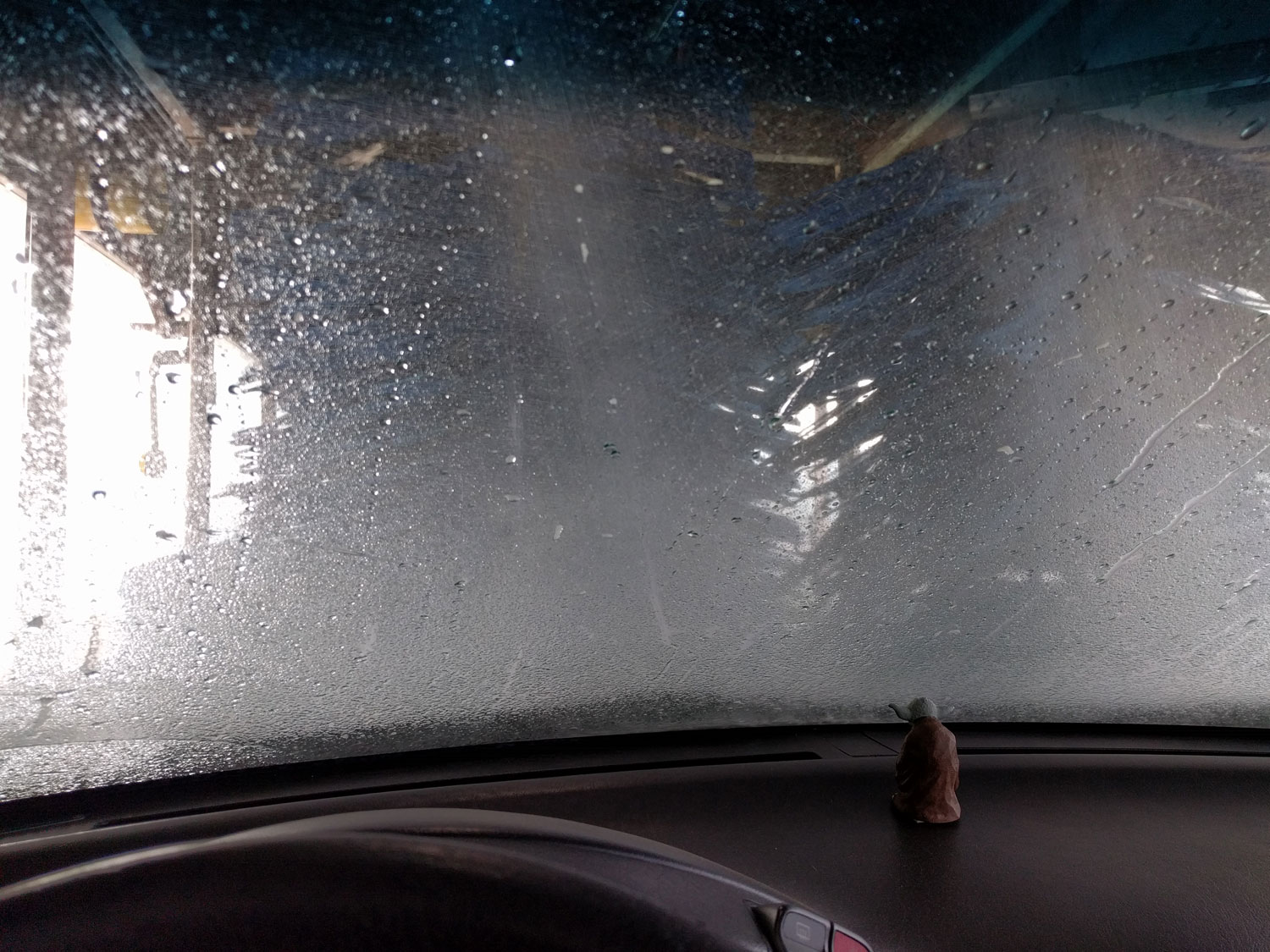 I spent the next forty-five seconds being blasted from all sides by jets of pressurized water like something out of Das Boot. I may as well have just left the windows down. After it was over I used the industrial Shop-Vac to suck soap out of the upholstery and bail three inches of standing water out of the trunk.

With minutes left to go I pulled up to the “street of classic car dreams” behind a pristine Shelby GT350 Mustang and something that looked like a goddamn Creamsicle Batmobile.

Each vehicle ahead of me checked in with an older guy in a reflective vest. My heart started to race.

The criteria for entry as I understood them were:

The first one I definitely had nailed. The second one I was prepared to debate.

One of the del Sol’s previous five owners had done a ton of nick-and-scratch touch-up work with a color that very nearly matched the original paint job. But when I bought the car there was still a big scratch in the front bumper. 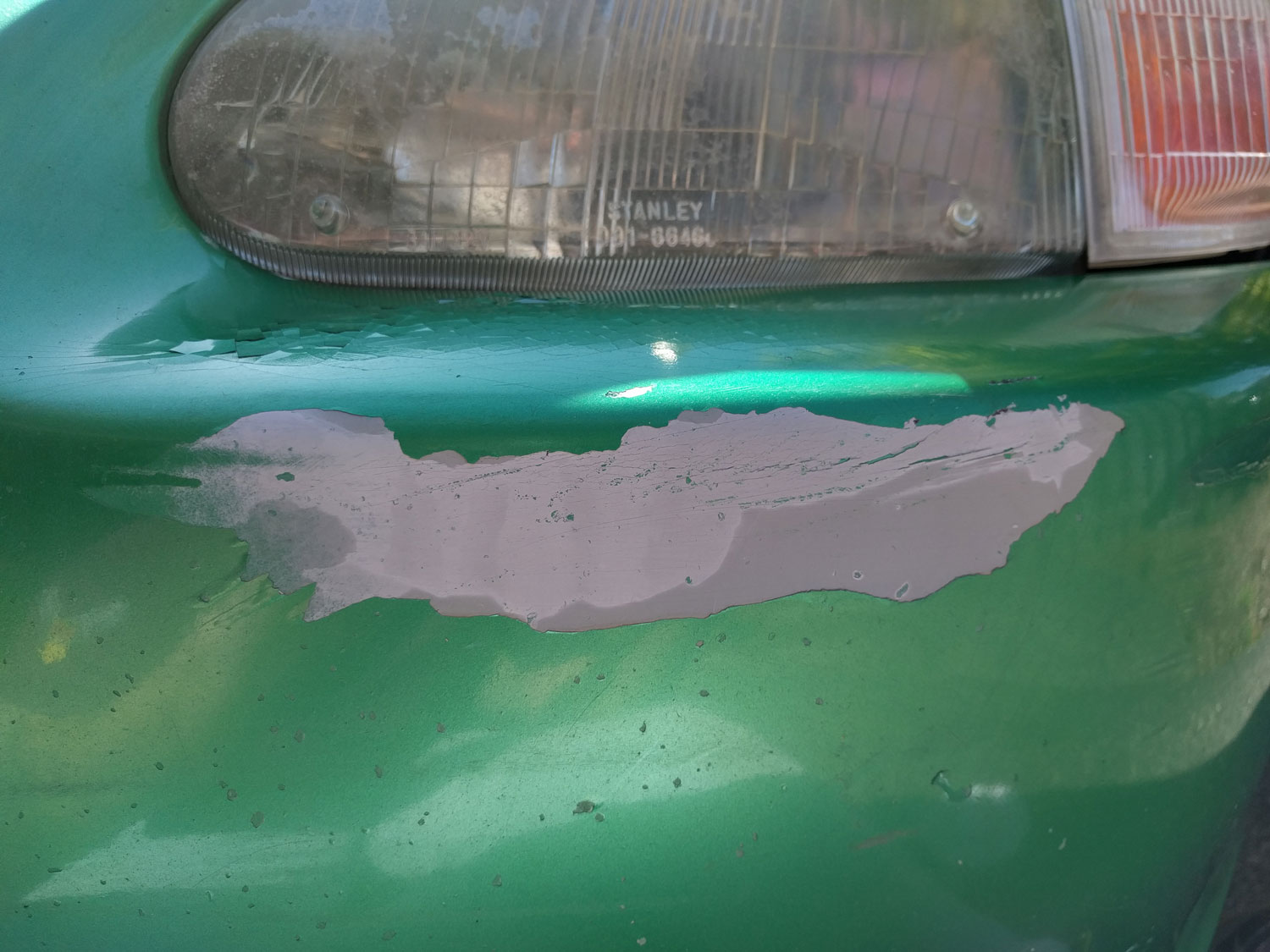 I thought, “I can fix this. I went to art school. I can do a flawless repair job.” Then I thought, “I also have no money and I’m kinda tired.”

So I went to Joann Fabrics and bought a 99 cent tube of the paint that was most closely not exactly the wrong color and hastily brushed it on. 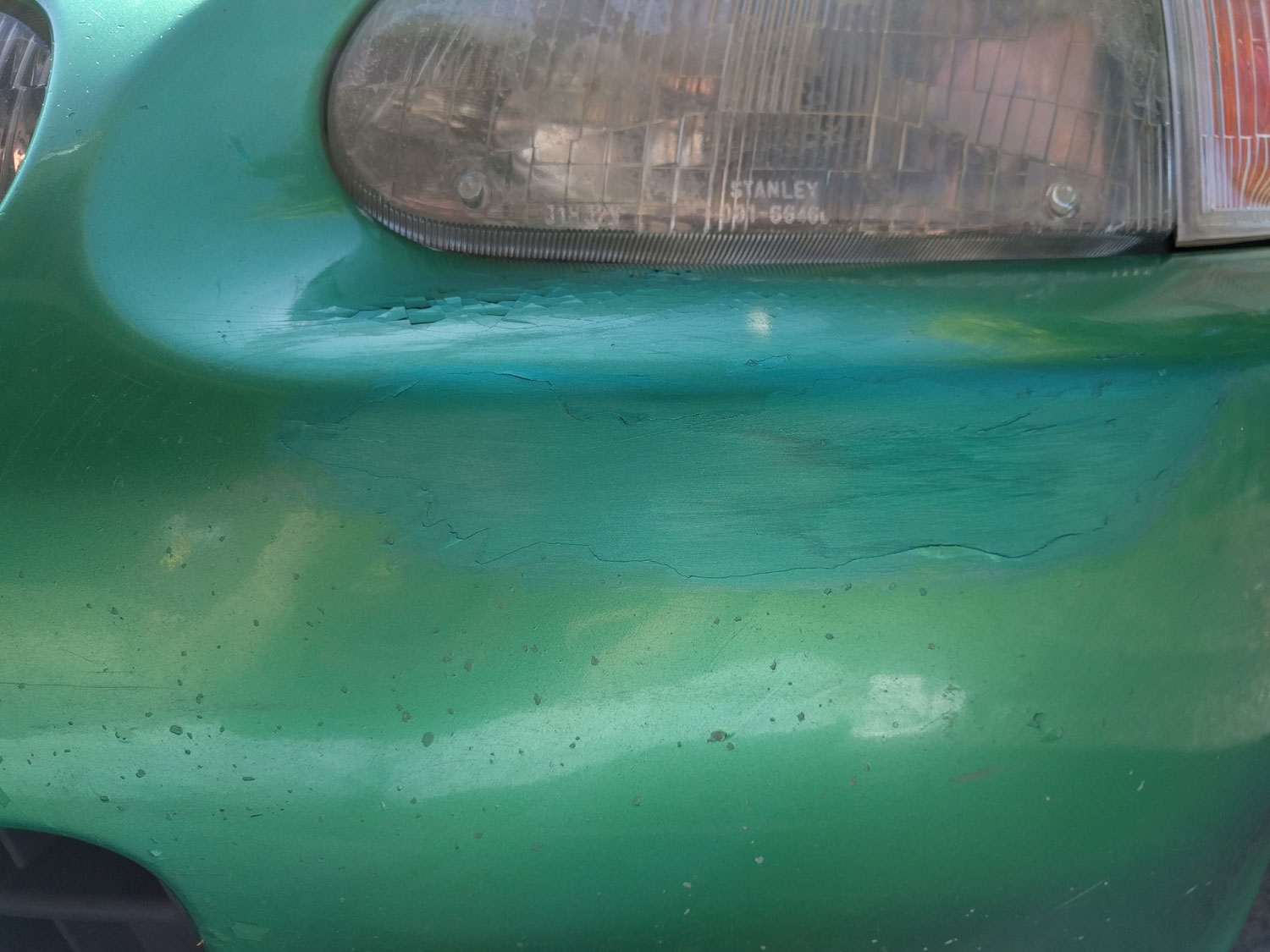 The final finish is indistinguishable from the original paint, assuming you’re standing thirty feet away and it’s also nighttime and you’ve been pepper sprayed.

My heart was throbbing in my ears as I pulled up to the gatekeeper. He looked at me, then looked my car up and down, his face completely bereft of expression. I drew in a breath, ready to plead my case, bracing for rejection. But before I could speak, he just waved me in.

Didn’t say a word. Just waved me in.

I had spent two years telling myself I wouldn’t be accepted because I drive a jokey, punch-line of a car. But more so because I feel like I’m a jokey, punch-line of a man. I lack the self-confidence to face potential rejection, even when the potential rejection is something so incredibly shallow and stupid as being denied permission to display my car on a side street for three hours on a Tuesday night.

And now here I was. I was in the car show with real classic cars. I was no longer an outsider with a secret dream of being included. I was now one of the dudes hanging out and chatting up passers-by about his “sweet ride.” I was a car-show guy.

I talked to a few enthusiastic del Sol fans who wanted to check out the engine and talk specs and horsepower and other things I don’t have a clue about. I brightened the day of a guy who always wanted a del Sol and told me all about his plans for a custom restoration when he gets one. I met a bunch of kids who were excited there was a car in the show they were actually allowed to touch.

I remembered that my car is actually pretty awesome.

In this case, that is literally all I had to do to succeed. All I did was ask. In fact, in the most technical sense, I didn’t even ask verbally. I asked just by showing up. And they said yes.

I’m going to remember this lesson, and keep applying it, and see how far it takes me. Maybe next I’ll ask to own a car with a model year starting with “2.”

2017-08-30
Previous Post: The 2017 Great American Eclipse broke my brain
Next Post: Snoozebox: The portable hotel for people who don’t poop