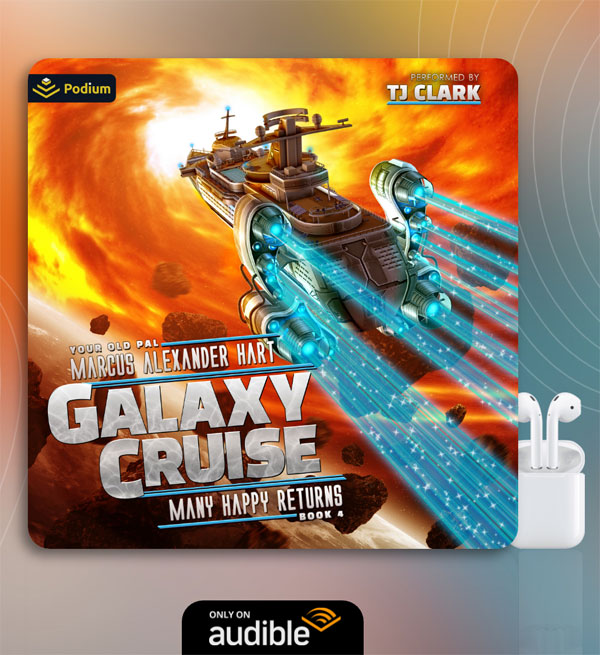 Today is the audiobook release of the final Galaxy Cruise book, Galaxy Cruise: Many Happy Returns. As always, narrator extraordinaire TJ Clark totally hit it out of the park. If you’re interested in giving it a listen, you can get it on Amazon and Audible.

One of the reasons I’m so proud of Galaxy Cruise is because it’s the first series I’ve ever completed. Okay, so that’s not technically true. I completed Zombie Reconstruction Squad, but that was under a pen name, so it doesn’t count. Also, it wasn’t nearly as completely complete as this is.

With today’s release of book four, the full Galaxy Cruise saga is now available in ebook, paperback, hardcover, and audio. I’ve never had hardcovers or audio before, so this feels like a Big Deal to me. I feel like a “real author.” And I couldn’t have gotten here without your support.

Thank you for going on this long, strange space journey with me. In an attempt to express my gratitude for sticking with me all the way to the end, I’d like to take you back to the beginning…

In August 2020, Kate Pickford issued a call for entries for her Hellcats anthology. I wanted to submit a story from the Galaxy Cruise universe, but at the time I was only a few chapters into writing book one. Which meant I had only the vaguest idea what the “Galaxy Cruise universe” even was.

I did, however, know that there would be alien cat people. So I wrote this little standalone story that takes place on the feline planet, Gellico. Though none of the characters from this story appear in the series, it’s a fun look into the expanded world of Galaxy Cruise.

There are no sign-ups or downloads or anything. Just click on over and enjoy “Tough Times at Tomcat Talent.”

On a side note, the title image above is the first artwork I’ve ever made using graphics created by artificial intelligence. I just kept telling it that I wanted “a cat girl in the style of a Sex Pistols poster” until it managed to produce five acceptable images.

Why did I use five when there are only three girls in the band in the story? I don’t know. I haven’t read this in a long time, and I think my brain subconsciously filled in the correct number of Spice Girls.

And that’s all I have to say.

I hope you enjoy the classic (but probably new-to-you) short story. And I wish you a safe and happy holiday season.  I hope that you live your best life in 2023 and beyond.

Until we meet again,