I Survived The Big Bounce America

A gaily colored inflatable monster is making its way across the USA.

Its creators call it “The world’s largest bounce house.” This is a claim I believe. At 10,000 square feet and standing over thirty feet tall, this pillowy menace is approximately ten times the size of my actual house.

Those who have been inside the belly of the beast call it The Big Bounce America. 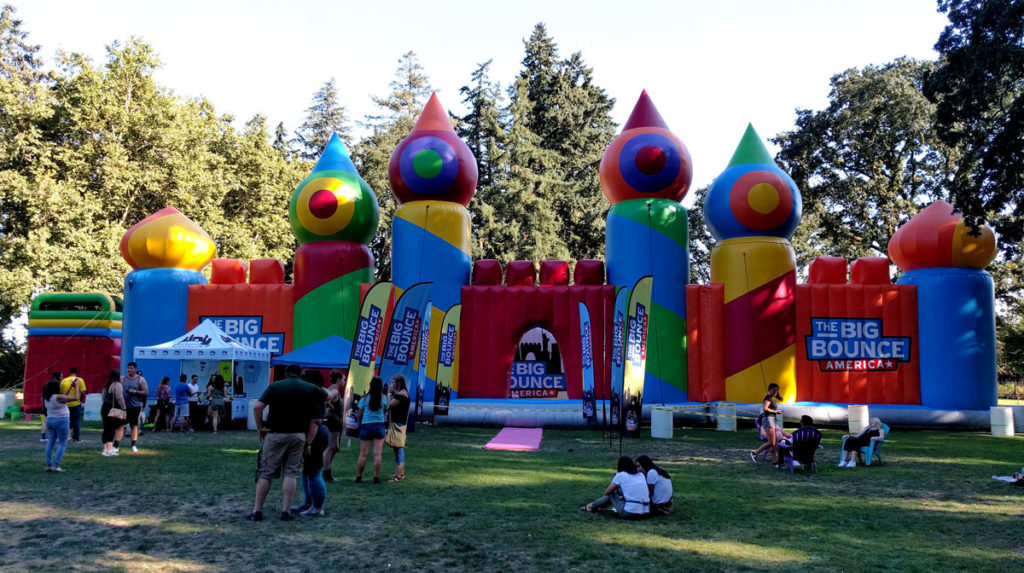 Over Labor Day weekend, The Big Bounce America landed in Hillsboro, Oregon’s Shute Park. Or as the organizers call it, “Portland.”

When I found out this was happening, of course I was all in. Because this is the kind of thing I think is a good idea, despite all evidence to the contrary.

Evidence such as the fact that “Portland” was going through an epic, unprecedented heat wave at the time, and it would be literally a hundred degrees inside the bounce house.

Evidence such as the fact that I had recently been on a trampoline doing a Spider-Man impersonation and threw out my back so hard I spent the next week lying on a heating pad eating pain killers like cereal and praying for death. 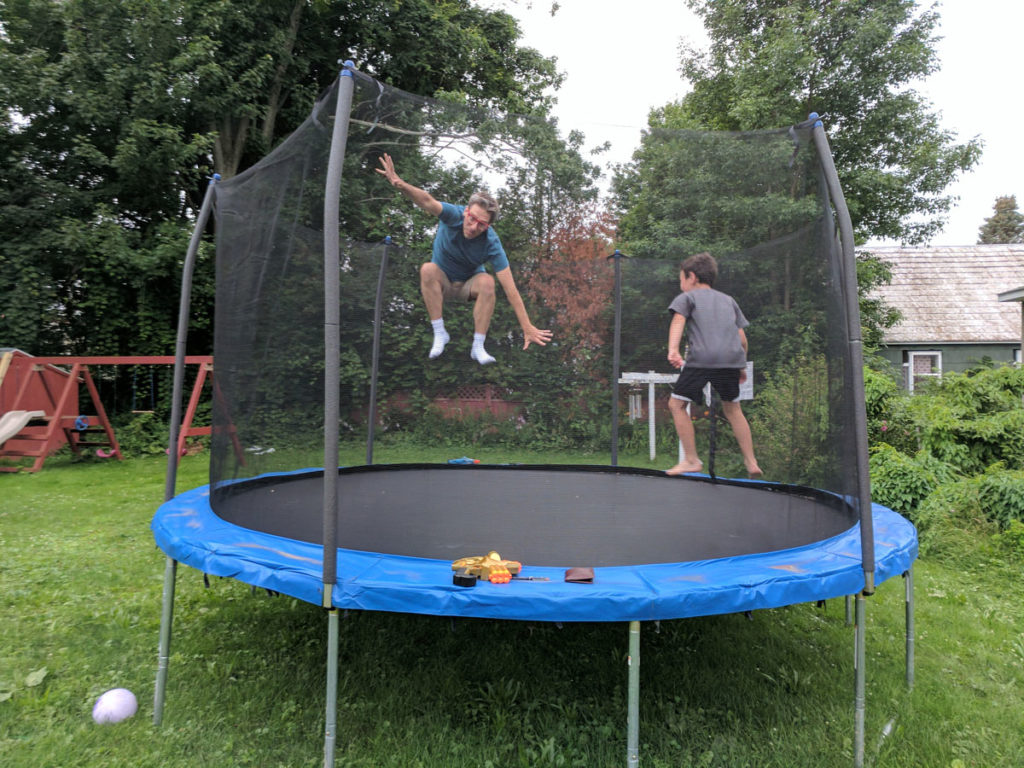 The Big Bounce website mentioned that no shoes are allowed inside the house, and all bouncers must wear socks. It said they would have a limited number of “grippy socks” available for purchase.

I thought, “Ah! That means grippy socks are the ideal footwear for this experience. Luckily for me, I still have the pair they gave me at the hospital when I had my ACL reconstruction surgery!”

Which reminded me to wear my knee brace, because I have complete faith that no matter what abuse I put myself through, fifteen bucks worth of ragged spandex and spent velcro will absolutely keep my damaged ligaments from shredding like a stalk of twisted celery.

Throwing caution to the wind, I bought tickets.

Specifically, I bought tickets for the first day, for the first “adults only” session offered, in an attempt to minimize how much of the bounce house’s candy-colored surface would be coated in sweat, baby drool, probably vomit, and other assorted varieties of strangers’ body gravy.

Even with several kids sessions happening before us, the Big Bounce still looked pretty clean and fresh by the time we got inside on Saturday afternoon. As you can see by this auto-stitched panorama, the bounce house was as large as promised, and also severely haunted by the ghosts of its past victims. 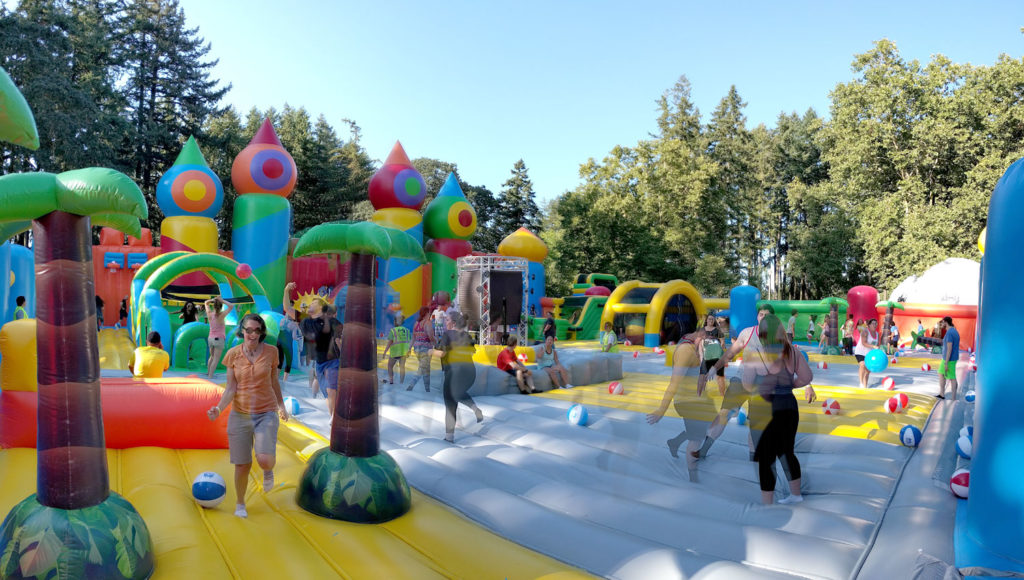 There’s a lot more to the Big Bounce than just bouncing. There’s all kinds of crazy crap going on in there. From left to right: 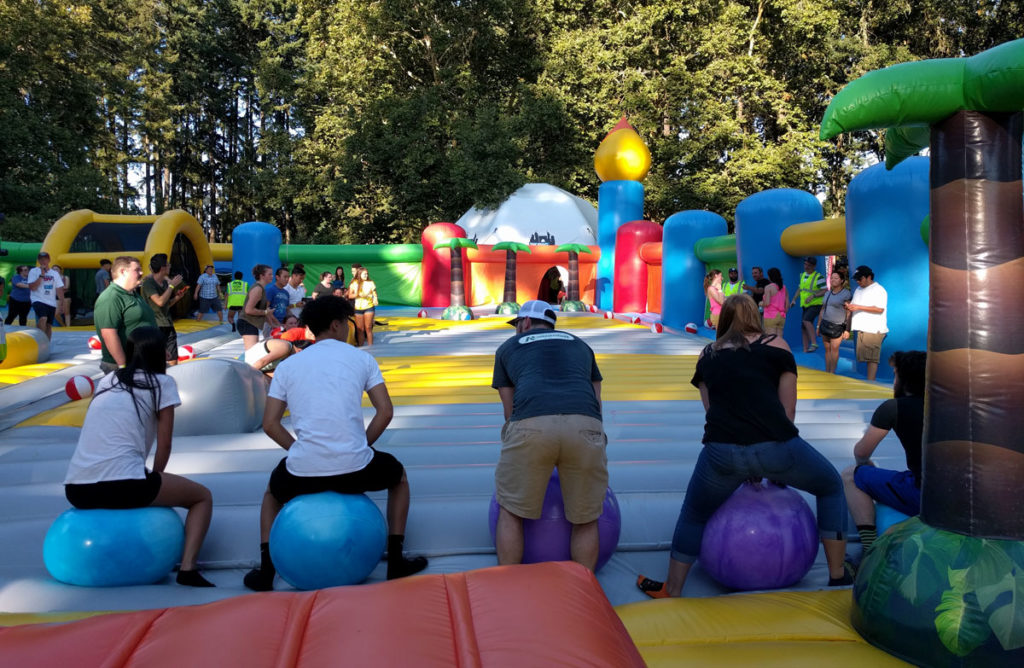 After about five minutes of bouncing around in the sun, myself and everyone around me were already drenched in sweat. The Big Bounce Crew made a valiant effort to keep us all from heat-stroking out by basting us with garden sprayers full of water. 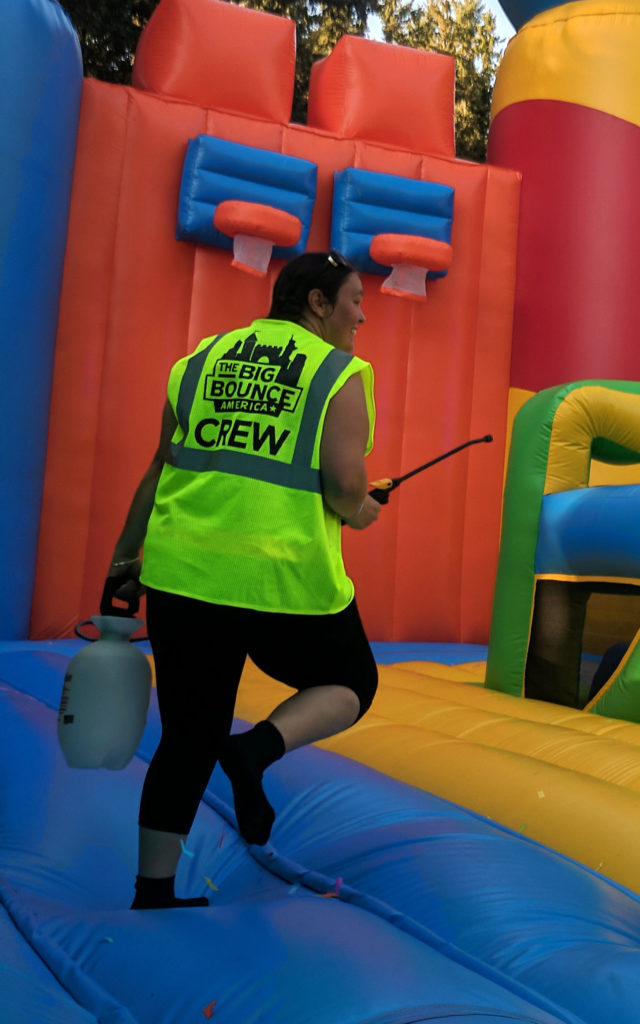 While this was going on, about every fifteen minutes or so the DJ would fire off a battery of confetti cannons, covering the crowd and every available surface with multicolored streamers.

So by the time the session was in full swing, everyone had been pretty well tarred and feathered in moist, salty, tissue-papery good times.

At some point I noticed a teenage gymnast bouncing to catch air, doing full backflips in the air, and landing on her feet. Of course my first thought was, “I can do that!” 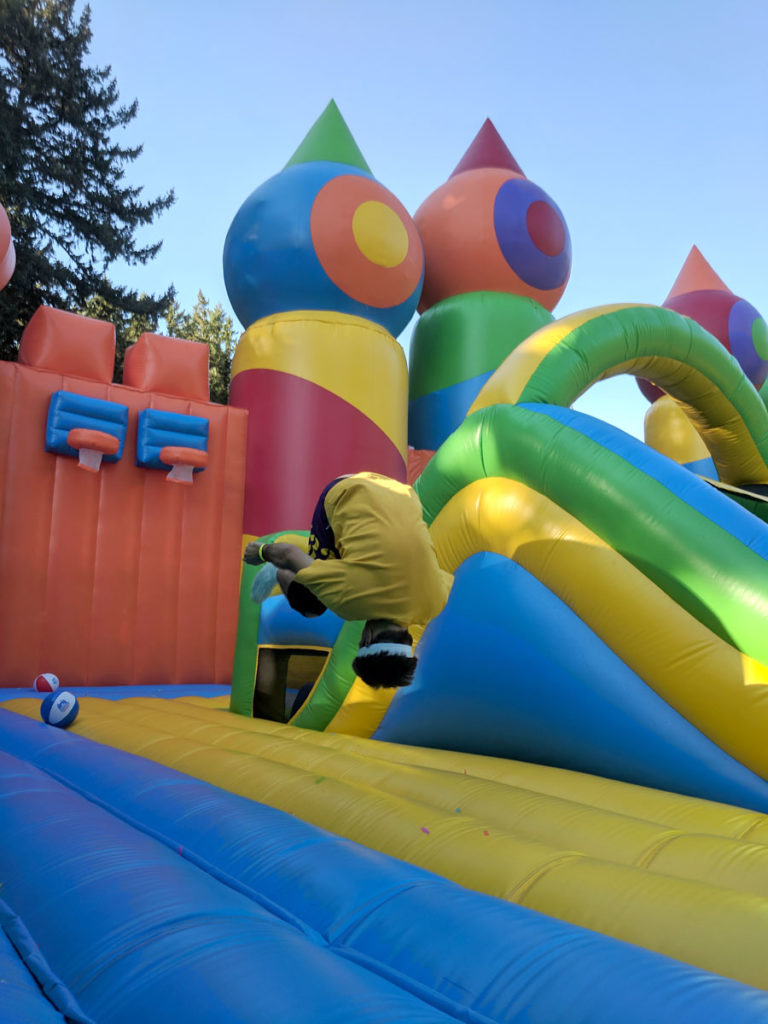 And I totally could. Sort of. I mean, I could do the flipping part. It was the landing that gave me trouble. Most of the time I landed on my back, pounding the breath from my lungs with a comical ooffgh noise.

One time I landed on my neck, letting fly an audible crack and a legitimate fear that I had fractured my spine. Which was quickly diffused by a wand of lukewarm water to the eyes. 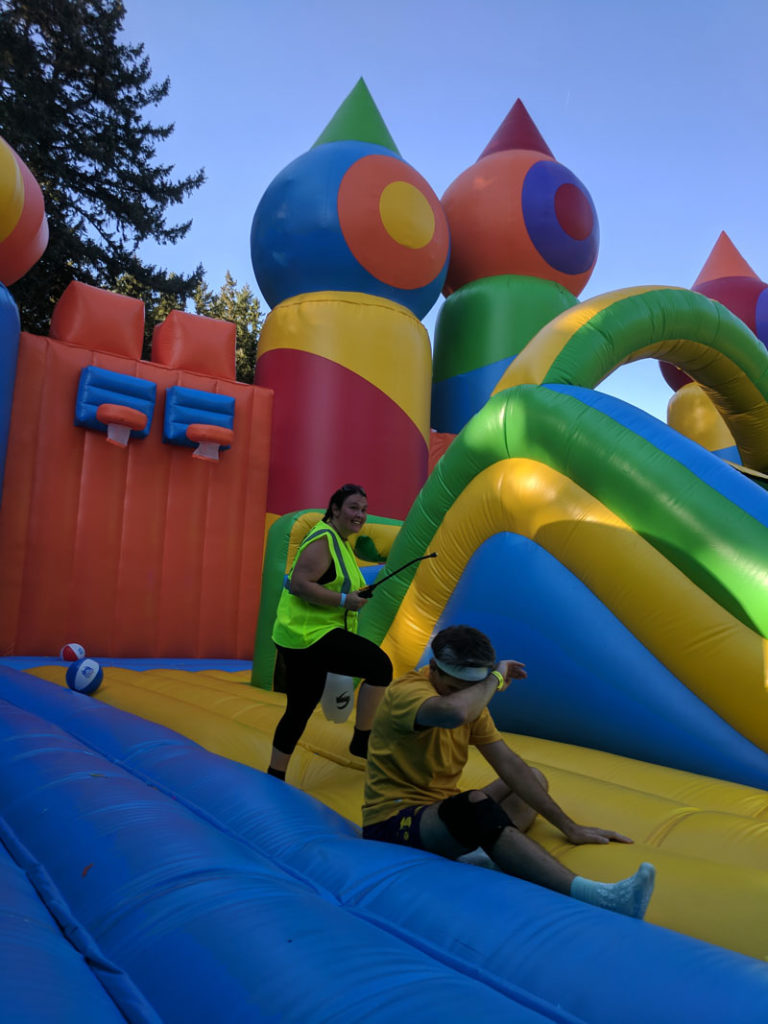 By this time I was an exhausted and sticky mess completely covered in disintegrating, rainbow-colored paper garbage and other people’s lost hair and loose change. So I decided to hop out of the main bounce house and collect my wits in the “Chill-out area.” 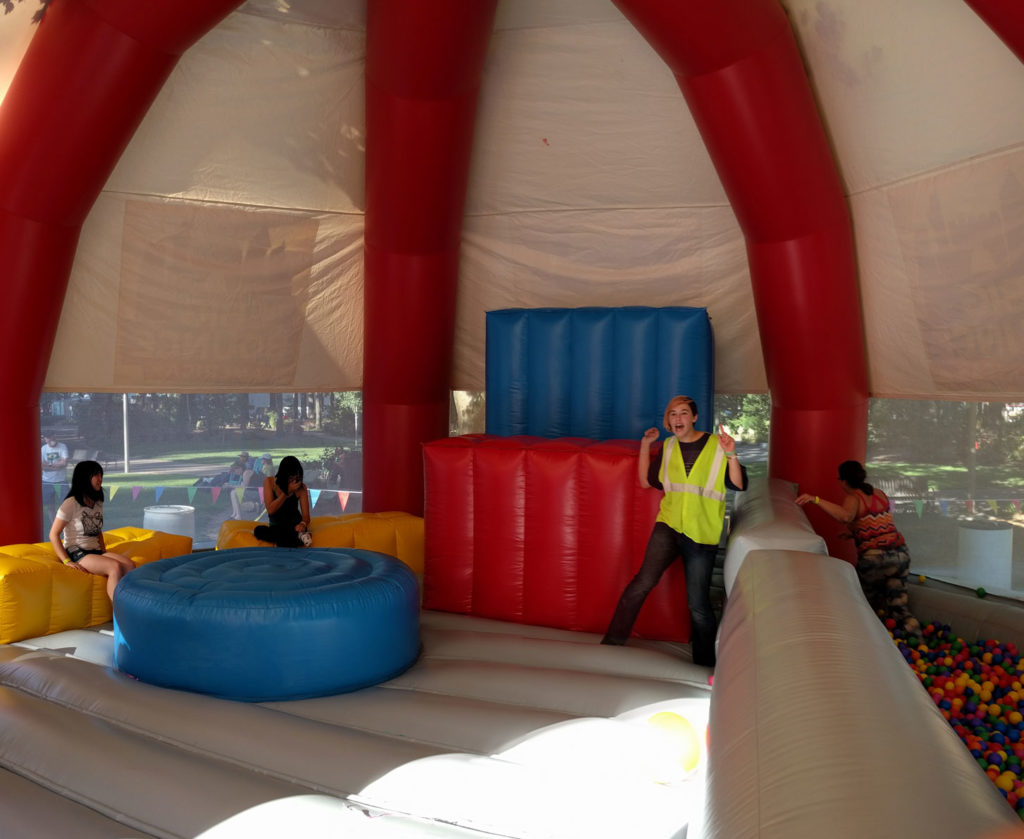 I flung myself over the barrier like an Olympic high jumper, executing a beautiful back-first dive and falling three feet into eight inches of plastic balls.

When I regained consciousness the girl in the vest was resignedly shaking her head, mumbling, “That is literally exactly what I just said not to do,” with a strongly implied, “How did you survive to be so old while being this stupid?” 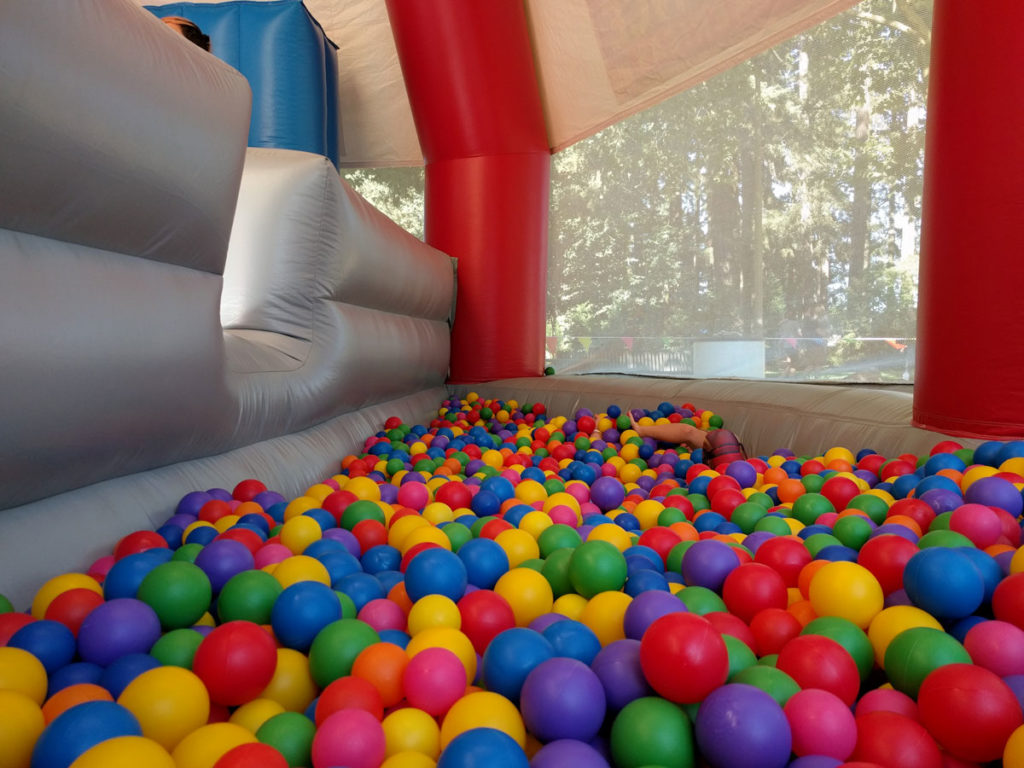 But the girl’s (admittedly earned) judgment didn’t bother me. It barely even registered. I was way too distracted by the balls themselves. I was lying on my back, buried up to my nose in them. And they smelled like they had been individually rubbed in armpits before being stored in a diaper hamper in a damp basement.

As the smell singed my nostrils, I wondered if I had been forbidden from jumping in the ball pit because of the drop, or because it was a quarantined biohazard. When I noticed the dead body buried on the other side of the pit I floundered my way back to the safety of the Big Bounce proper without looking back.

By this time our hour-long session of bouncy mayhem had just about come to a close. My old body was overheated and delirious, and I wasn’t alone. While the DJ used all of his high-energy mojo to keep the party going, even the teens and millennials were rapidly melting into greasy puddles on the plastic.

Despite my best efforts at self-destruction, I exited the Big Bounce America unscathed, save for one huge bloody scrape on my left elbow that could have been avoided if I was capable of using a slide like a human.

If you want to try your hand at mortally wounding yourself in an air-blown cathedral of fun, the Big Bounce America is currently on tour all the way up to Thanksgiving 2017.

Tickets are still available for:

Go get your bounce on.

But bring some wet wipes.

2017-09-18
Previous Post: Snoozebox: The portable hotel for people who don’t poop
Next Post: The Worst Car Wreck I Never Had