That is to say, you may know them from their hit TLC show, but I don’t. I’ve never seen the show and didn’t know anything about it, so I consulted an expert in the field of reality television: my mother.

If it’s on TV and it has people cooking something, battling for a soulmate, or just yelling a lot, my mother has it on her DVR. So before I ventured to Roloff Farms, I called Mom to ask what I should expect.

She explained that the show is about a family, some of whom have dwarfism and some do not. (There was actually a lot of second-guessing over how many people there are in the family and their relative sizes, ending with her telling me to quit bugging her and just Google it.)

As for activities, Mom said the farm has a shop where you can “buy pumpkin bread and stuff,” “some kind of hay ride,” and “the wedding barn.” When pressed for details on that last one, she clarified, “It’s a big barn where they do weddings.”

“So that’s what the show is about?” I asked. “They grow pumpkins and perform weddings?”

“Yeah,” she said dismissively. “They also talk about their lives and whatever.”

With our intel collected, Amanda and I set a course for Roloff Farms. As soon as we left the highway, temporary directional signs began appearing on telephone poles with a Wall-Druggian intensity.

Finally we reached a sign constructed in a style that can only be described as “Straight outta Toontown.” 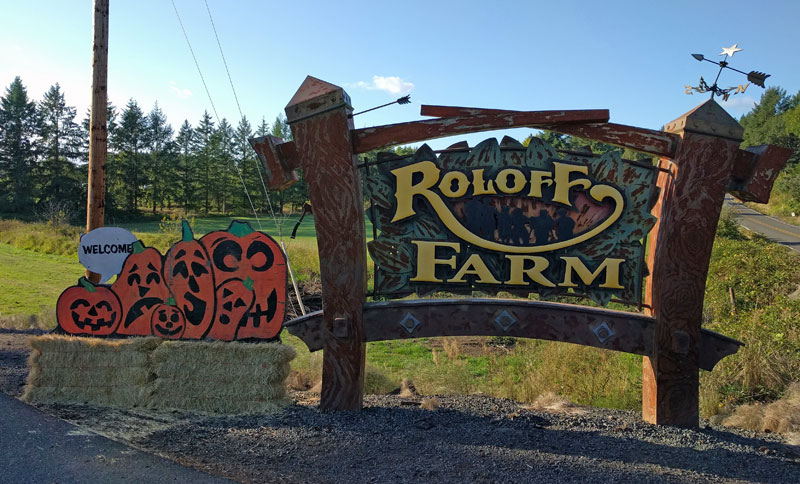 The farm immediately scored points for having bountiful free parking. The pumpkin patch is also free to enter, if all you’re looking to do is grab a gourd and run. The going price is a premium 45 cents a pound, but these are Cadillac pumpkins. 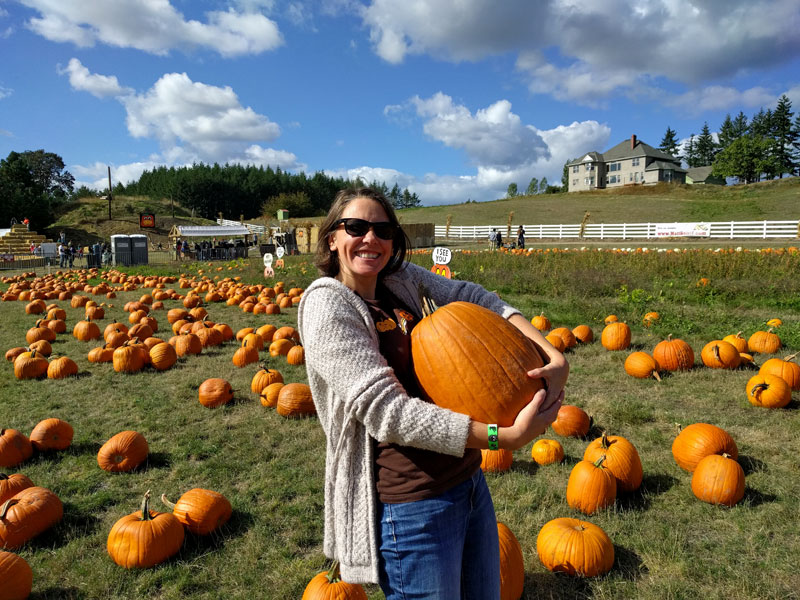 While the local Safeway only seems to stock “perfect” pumpkins with beach-ball roundness, the Roloff pumpkins are infinitely unique. Squashy. Stretchy. Bumpy. Derpy. They’ve got ’em all. And they’re SO ORANGE.

But pumpkin pickin’ is not all Roloff Farms has to offer. In fact, it’s not even the best thing. By a long shot.

Fourteen Dollars Worth of Adventure

Mom said there would be a “Famous Farm Wagon Tour,” but she failed to prepare me for the other options I was presented with at the front gate. 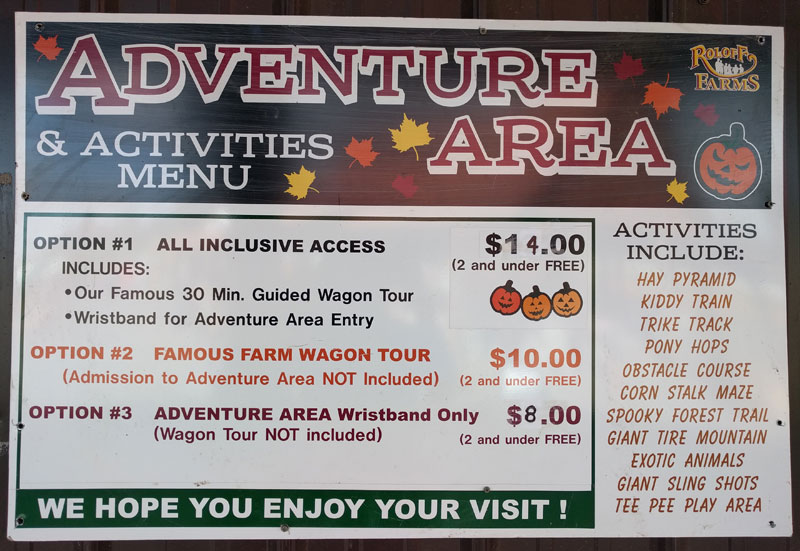 After perusing the list of included activities, I asked the Disneyland-friendly teenager at the front gate if “All Inclusive Access” was worth it for adults with no kids. She said most of the activities were geared toward children, but adults were not prohibited from joining in. Her sales pitch finished with a shrug and a casual, “If it were me, I’d buy it.”

The second we had our All Inclusive Access I knew we had made the right decision. The admission wristband is on point. Look at this thing. 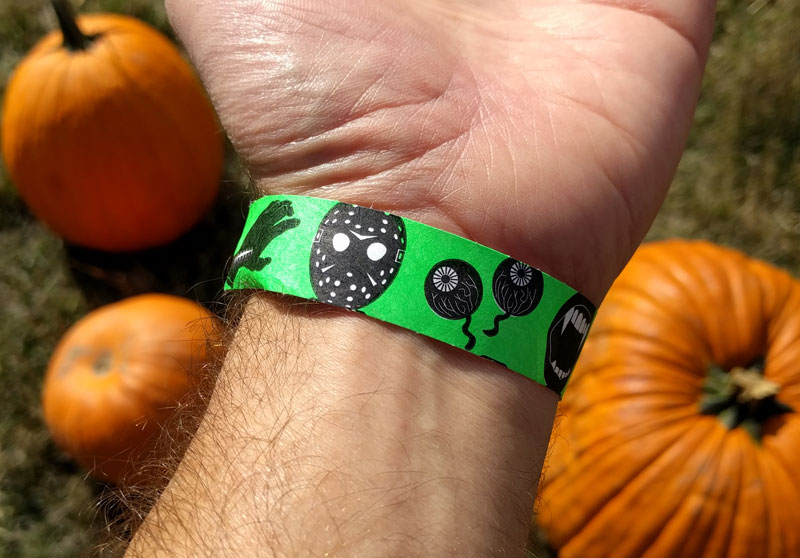 As befitting a family farm, all the activities in the Adventure Area are decidedly low-tech fun designed to get you moving. And if you love climbing on top of piles of rural things, YOU ARE IN LUCK.

There’s also a “corn maze,” constructed in a way that makes me think the Roloffs aren’t familiar with the concept of corn. 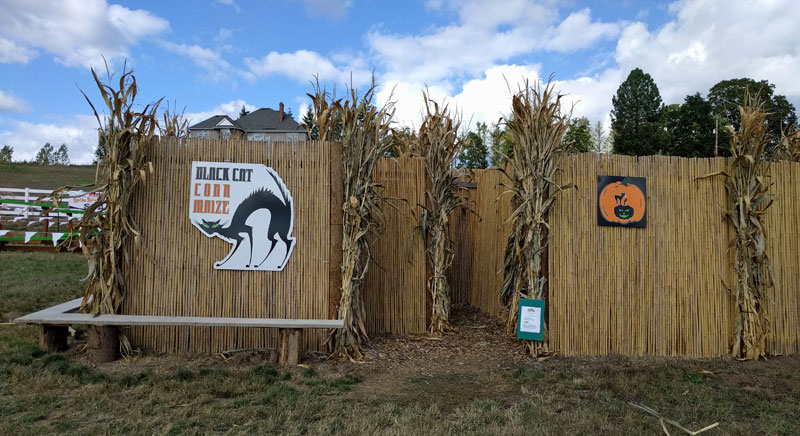 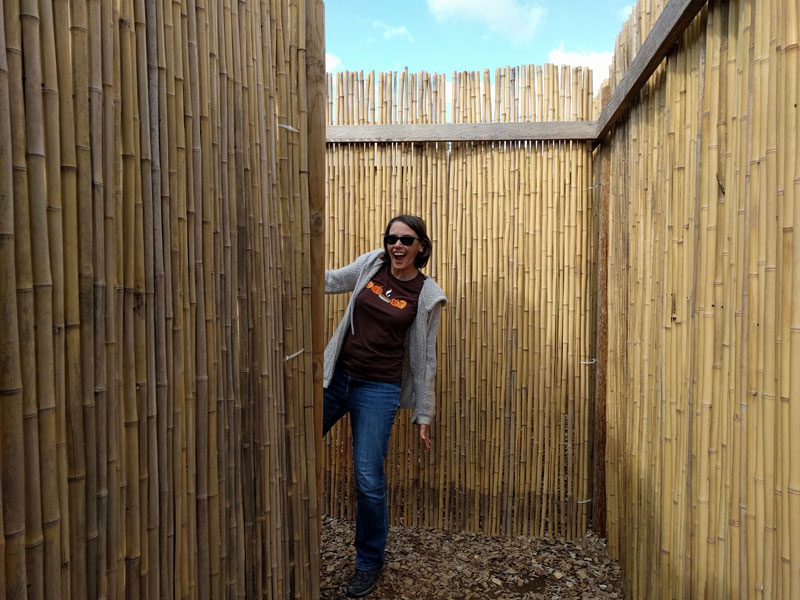 There are not one, but TWO raceways open to all, but clearly designed for people with legs less than fifteen inches long. Try your skill on the “Pony Hops” hippety-hop balls. 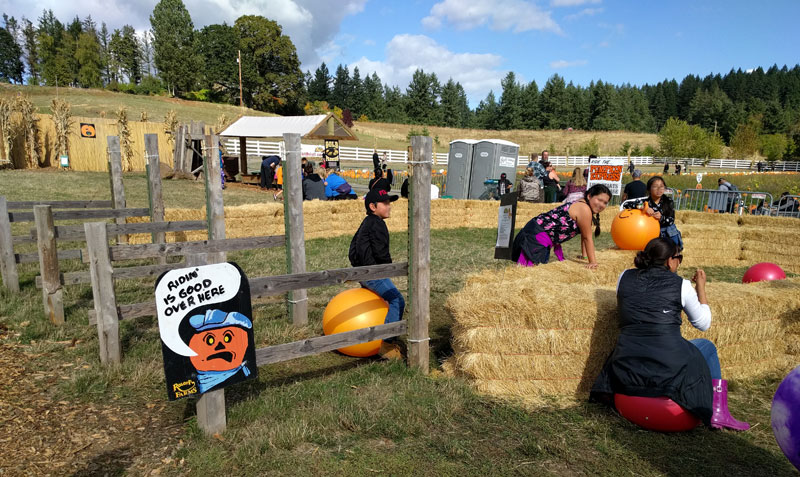 Or, if you want to really struggle with all of your excess leg, take a spin on the “Trike Track.” I managed to complete a full lap, despite the fact my knees didn’t fit under the tricycle’s handlebars and I had to ride in a posture like a frog giving birth. 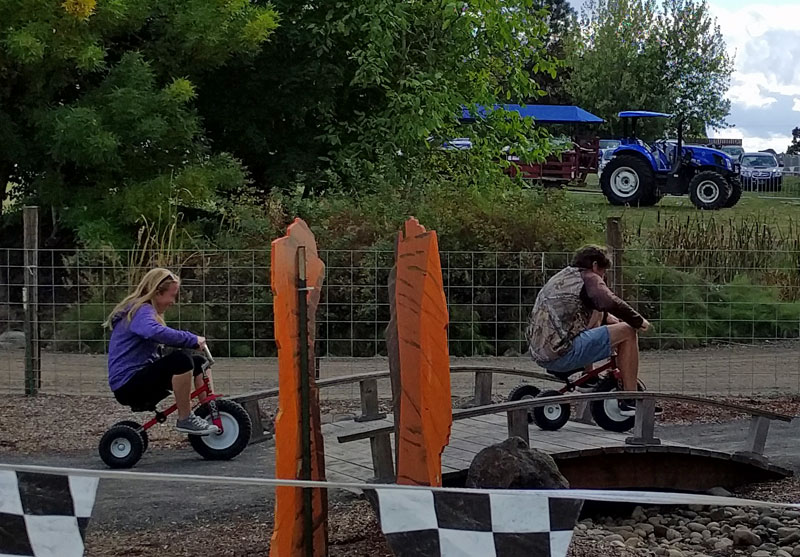 My favorite race is the Roloff Rail Roller. It is exactly what it looks like. Two giant pieces of corrugated pipe set on bowling-alley lengths of homemade track. One or two racers get into each pipe and hamster run all the way to the end and back. 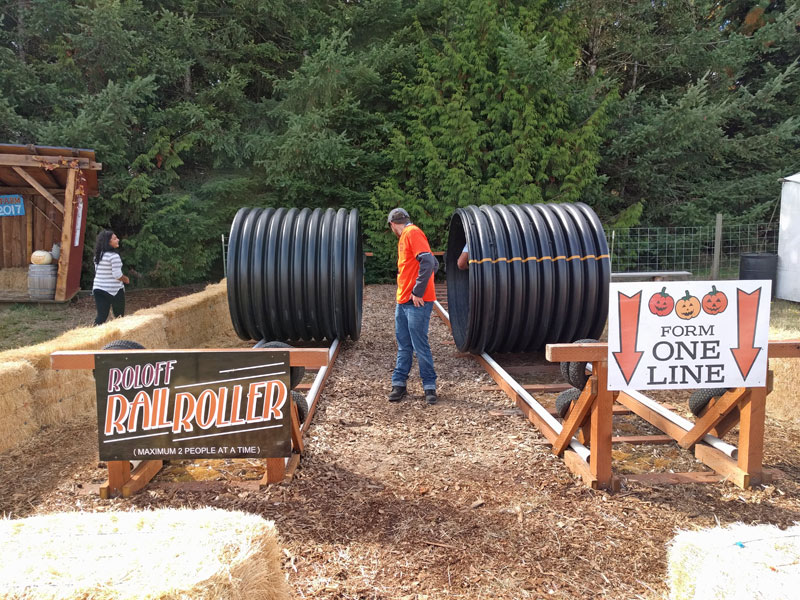 Again, unsurprisingly considering whose yard we were playing in, this race gives a solid advantage to people shorter than a barstool. While Amanda and I struggled to pick up speed running in an awkward hunch, the little kids in the other pipe got theirs rolling so fast it hit the bumpers and caught air on both ends.

But as fun as the races are, sometimes you just need to stop running and shoot something with a giant slingshot. In this case, a plywood pumpkin face begging you to lob a playground ball into its gaping maw. This is as close as you can get to playing Angry Birds in real life.

I said my technique is amazing. Not my accuracy.

Hop On a Wagon to WTF Town

After we had exhausted the fun in the Adventure Area, we hopped on the Famous Farm Wagon Tour. From what Mom told me, I expected the tour to include a bunch of crops and the Wedding Barn (where they perform weddings). Which it did. 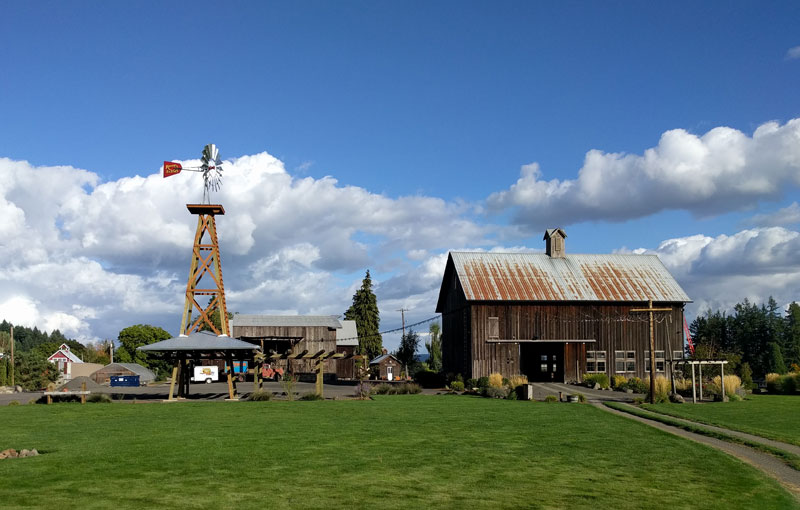 And then the tour kept going, and I stopped understanding what a farm even is when we passed Noah’s Arc. 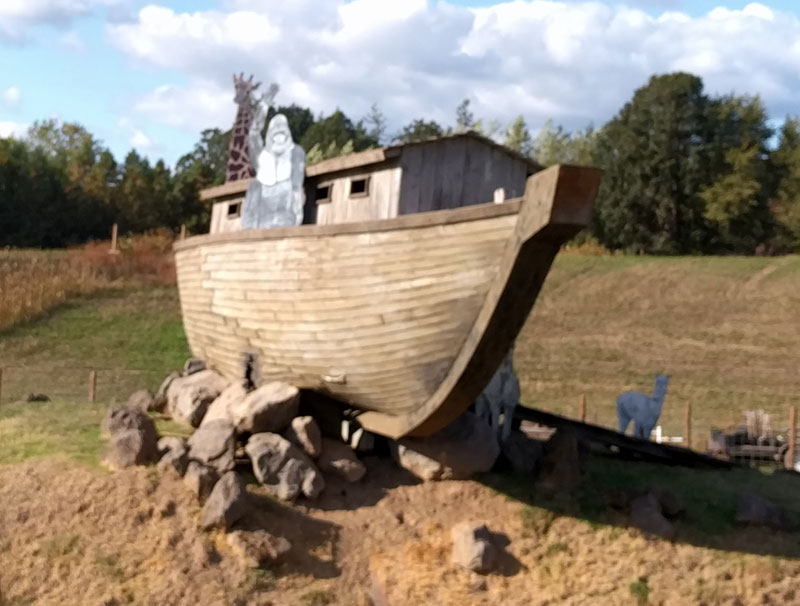 The wagon actually stopped for a few minutes so we could get out and explore when we reached the Wild West ghost town that is totally here for some reason. 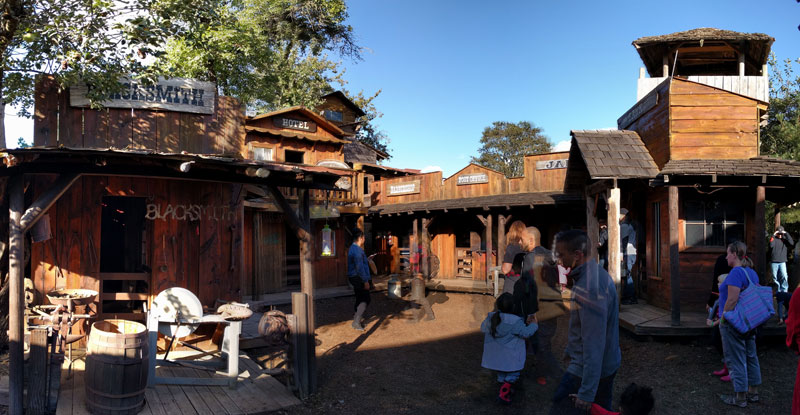 We did not, however, stop at the castle. Which is just as well, as it seemed to be under cannon siege. 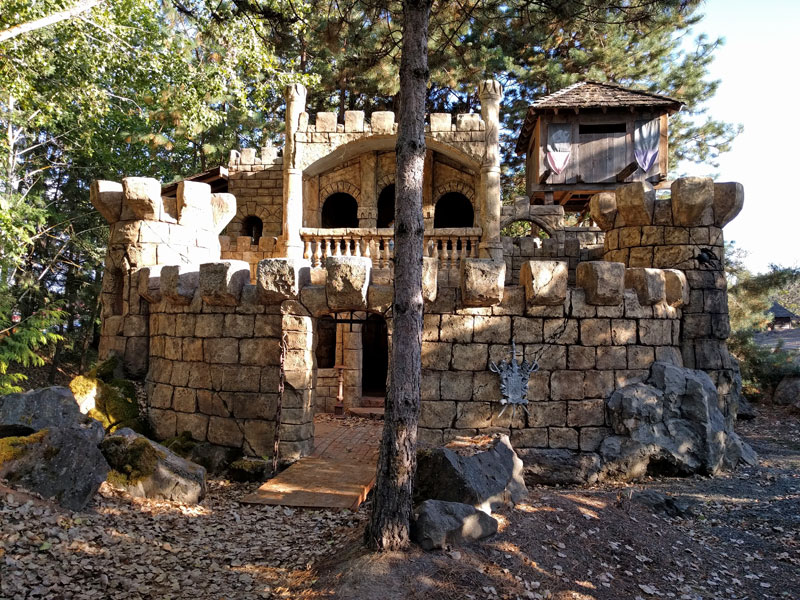 Right about here is where I started to feel like maybe Mom hadn’t seen every episode of Little People, Big World.

For all you fans of children’s books about rescue dogs written by farmer reality-show stars, the gift shop sells copies of Matt Roloff’s Little Lucy, Big Race. If you’re lucky, you might even get to meet Lucy herself.

I’m not a dog person, but even I loved Lucy (Insert Vitameatavegamin joke here). As one of the farmhands said, “She loves everybody. She’s had so many people petting her it’s a wonder she has any fur left.” 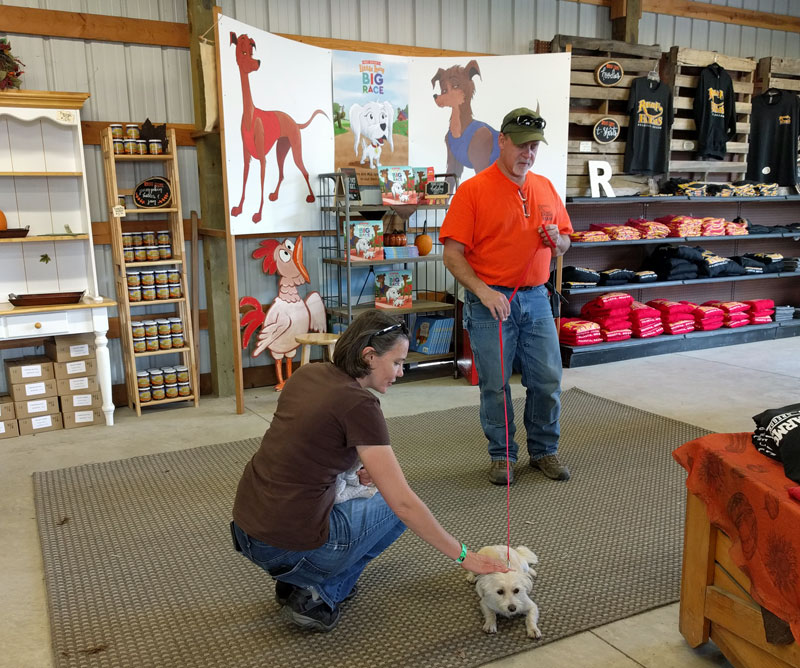 Even after all the things we’d seen and fun we’d had, I knew Mom would be disappointed if we didn’t give her a vicarious brush with TLC celebrity. Fortunately, we ran into this friendly butterfly who was game for an impromptu photo shoot.

I assumed the butterfly costume was a display of Halloween spirit, but Mom explained this is Amy Roloff, and she sometimes dresses like a butterfly because she’s “always busy fluttering around.” So there you have it. 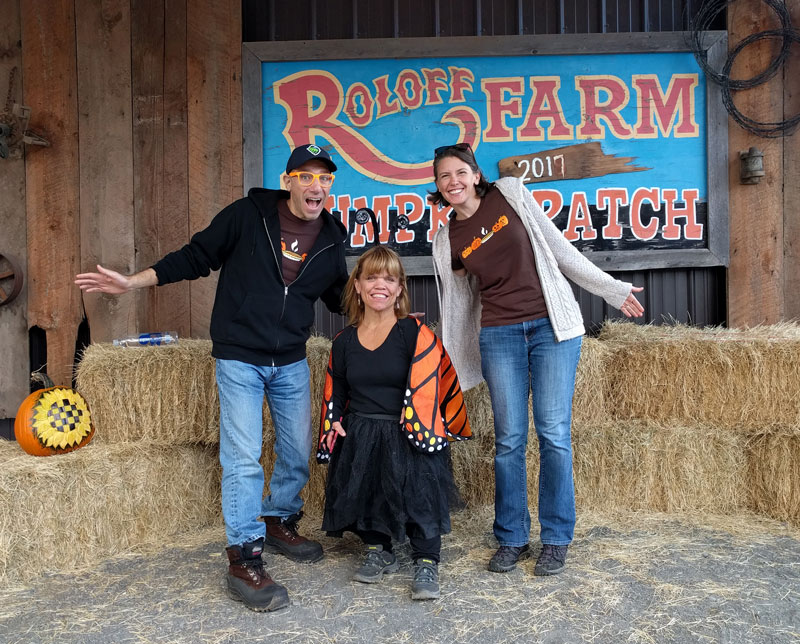 Get thee to a pumpkin farm!

Roloff Farms was more fun than I ever expected to have visiting the set of a reality show I’ve never watched. If you’re in the Portland, Oregon area, I highly recommend getting out to Helvetia to pick up your pumpkins and get a lungful of farm-fresh fall air.

The 2017 Pumpkin Season runs from September 20 to October 29th, Fridays, Saturdays, and Sundays only. For full information on hours and admission, click here to visit their website.