Halloween Movies Choose Your Own Adventure

The trailer for the new Halloween movie just dropped, splitting the timelines of the Halloween Universe once again.

If you’re wondering how Laurie Strode (Jamie Lee Curtis) can be in this one when (SPOILER ALERT) she died in Halloween: Resurrection, then you must be new here. You see, the Halloween franchise is a fluid thing. Nothing can happen in it that another filmmaker can’t come along and negate with a hearty, “Nuh-uhh! That didn’t happen! We’re starting over!”

It’s at the point where the series is basically the end of the Clue movie.  “That’s how it could have happened. But how about this?”

To make it easier for new fans trying to get into the Halloween films, I drew up a timeline of the series thus far as a “Choose Your Own Adventure” flowchart. 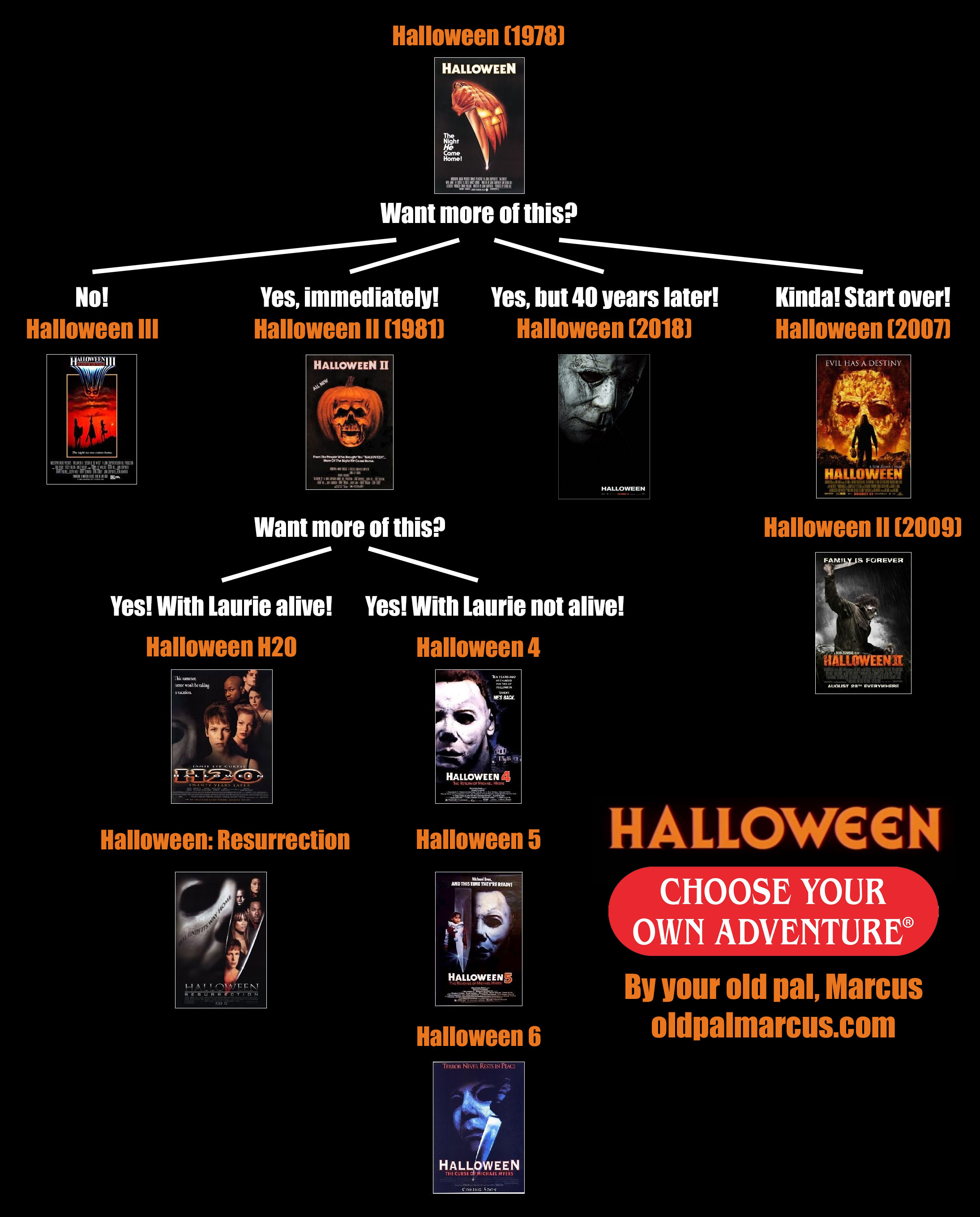 Over the past few days this chart has gone a little bit viral (including an awesome shout-out on Bloody Disgusting) and a lot of y’all have opinions to share about it. I just wanted to address a few of them:

“Why you hatin’ on Halloween III its the best one and your stupid and you should die.”

To which I reply, “Huh?” I guess maybe people think I’m dissing Season of the Witch because there’s a big “No!” written over it and they don’t understand how context works.

I regret not writing “Do you want more of this STORY?” which I think would have made my meaning clearer. As in “Do you want to see more of this story about Michael Myers killing people?” If “No!” then proceed to Halloween III, which is a whole new story.

Okay. This could be technically true, because in Halloween H20 Laurie reveals she faked her death to go into hiding. But that’s the only real nod to any continuity with parts 4, 5, and 6. Even if Laurie was technically alive in those movies, she wasn’t involved with the story, so was, for all intents and purposes, not alive. This is why, in the graphic, I phrased it as “Yes, with Laurie not alive,” rather than “Yes, with Laurie dead.”

Also, you can go straight from Halloween II (1981) to Halloween H20 and have perfect continuity (with no mention of Jamie Lloyd or the Curse of Thorn). Of course, this doesn’t account for what Michael has been doing for twenty years. Probably still cruising around in Loomis’ sweet government station wagon listening to soft-rock 8-tracks.

My point is, there’s a viewing order with an “Alive Laurie” and a “(Presumably) Not Alive Laurie.”

If you want to be a full continuity purist, you can argue that there is only one post-Halloween II (1981) timeline that goes straight through from Halloween 4 to Halloween: Resurrection. And many of you do want to make that argument, because this is the internet, and that’s what we do here.

At any rate, I’m glad you enjoyed (or hated) my take on the all the “Halloween Timeline Infographics” that have been going around lately.

Want to talk about it? Want to tell me how wrong I am? Admit your crush on Ben Tramer? Leave a comment!

2018-06-12
Previous Post: Recipes of Yesterday: Buttscoth Yummies
Next Post: Caster’s Blog: Based on a true story that never happened.