During a recent Skype call, my mother mentioned she was going through an old recipe file and found one of mine.

“Well, this one has your name on it, and it’s in your old handwriting.”

I squinted at the card she held up to the camera.

“Close,” she replied. “Apparently this is a recipe for ‘Buttscoth Yummies.'”

Despite the forensic evidence suggesting I was responsible for this card, I have no recollection of it. Though I do like the fact that some unknown person with a blue pen added an “er” to one my incorrect spellings of “buttscoth” to make it the also incorrect “butterscoth.”

I can say with certainty that I didn’t invent this recipe. But where did it come from? Did a teacher give it to me? A teacher who was trying to kickstart ADD and childhood obesity? Did I copy it from some cartoon? Like, a European cartoon, where they measure in metric? Did Danger Mouse teach me to make Buttscoth Yummies? It’s a riddle wrapped inside an enigma drenched in corn syrup.

I also don’t recall ever actually seeing or eating a Buttscoth Yummy at any point in my life. And frankly, I suspect that’s because the memory is trapped behind a wall of sugar-coma PTSD. But when your past self reaches through time to give you a mystery recipe, you kind of have to make it, right?

Next on Memento Test Kitchen… 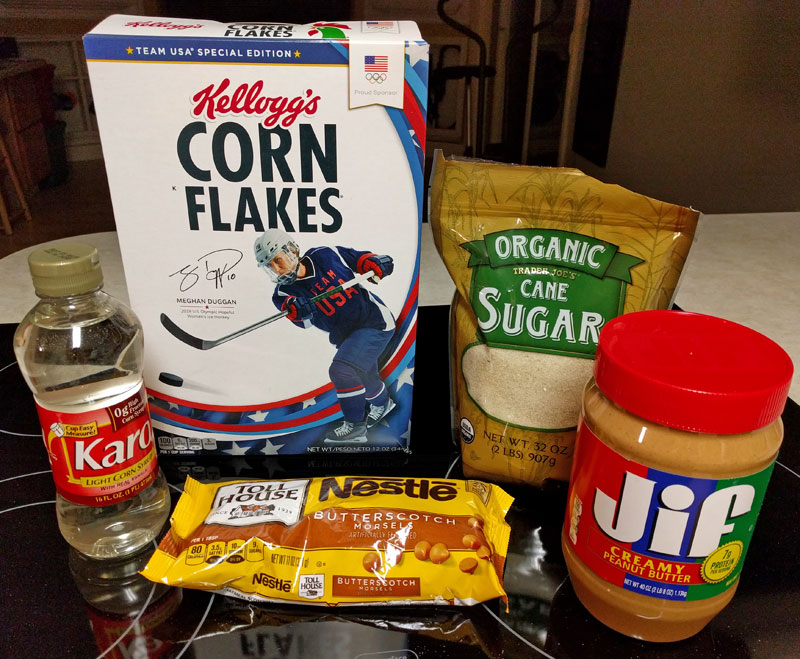 When you line up the ingredients, it actually does kind of look like something Child Me would invent. “Okay, so first we take sugar, then we put candy in it, then we mix that with liquid sugar. Then a glob of peanut butter. Then cereal. The food pyramid is my bitch, yo!”

Despite the fact that it’s in basically every single thing available for Americans to eat, I’ve never actually seen corn syrup in its native form. It’s clear, intensely sweet, and disturbingly mucousy. It’s basically what would come out if a cake sneezed.

Amanda looked at the recipe and said, “Wait, why are the ingredients measured in grams? Did you make these in home-ec or science class?”

I was like, “I don’t know, man. Maybe my elementary school was still holding onto the metric dream of the ’70s.”

“No, I mean, who lists ingredients by weight and not volume? How am I supposed to pour fifty grams of sugar into a measuring cup?”

I agreed this was a problem. Fortunately we had a disused postal scale that was desperate to prove itself useful.

But I’m getting ahead of myself…

The first step was to boil our 50 grams of sugar with 100 milliliters of cake snot and a full pack of Butt(er)scoth chips until they became a substance dentists call “Danger Paste.” That’s what we assumed, anyway. The instructions are nearly verb-free. All it says is “boil.”

And how long were we supposed to stir this mess? Technically the directions don’t say to stir it at all, but we decided to take liberties when it started to smell like someone flash-frying a sack of Werther’s Originals.

We assumed it was ready when it started looking like gelatinous diaper gravy.

Now it was time to add the 600 milliliters of Corn Flakes.

“Hold on,” Amanda said. “Why the hell are the sugar and peanut butter measured in grams but the Corn Flakes are measured in milliliters? CORN FLAKES ARE NOT A LIQUID.”

Since we don’t happen to have a graduated cylinder in our kitchen, we converted milliliters to cups and dumped the requisite amount of crushed cereal into our sugar poop. 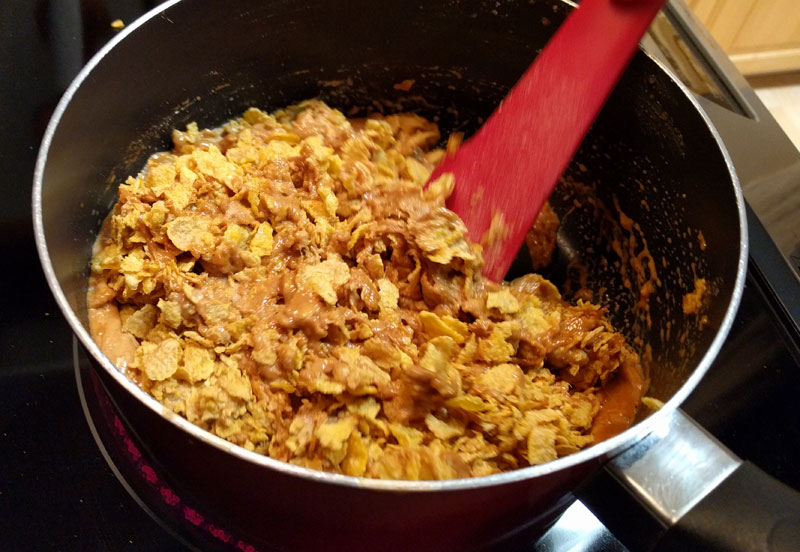 This gave our concoction the tantalizing appearance of a fistful of autumn leaves scattered over a pot of undercooked curry. Right around here is where I started to doubt we were doing this right. Amanda just shrugged and said, “Well, this isn’t exactly the brainchild of a culinary master. The instructions were written by a six-year-old. Who was you.”

Once the mixture had fully achieved the appearance of peanut-shell chili, we decided it was time to move onto the final phase. Amanda started scooping the goop out and gently rolling it into balls. I was like, “Wait, what are you doing? The recipe says ‘Drop spoonfuls on waxed paper.’ It’s literally the only part of the instructions with specificity.”

She sighed. “Fine, but we’re going to use aluminum foil instead of wax paper. That way when we’re done it’ll be easier to crumple the whole thing up and throw it in the garbage.”

Despite being Past Me’s only clear instructions, rolling spoonfuls of the Buttscoth batter into balls was 100% more effective than dropping them.

By this point the whole kitchen reeked like someone had run a hot iron over a fistful of those inedible orange-and-black things from the bottom of a trick-or-treat bag. For something alleged to be “yummy,” the stench was truly, staggeringly unappetizing.

The last step of the recipe says “Let set,” but it doesn’t give any indication of how long. Amanda suggested we let them set long enough that we die and they become our heirs’ problem.

Fifteen minutes later I picked up a hunk and braved a sample taste. The Buttscoth Yummy had a rock-hard center wreathed with a crumbly exterior. It was a lot like biting into a walnut shell coated in dried mud. With the first bite, most of it shattered into debris that spilled down the front of my shirt and across the floor. So the texture left something to be desired, but the taste…

Oh, God. It was like somebody tried a Butterfinger bar and said, “Yeah, I kinda liked it, but it would be better if it were sweet enough to permanently damage my blood chemistry.”

If I had been given a Buttscoth Yummy in a blind taste test, I would have guessed somebody took the crap left over in the bottom of a tube of Pringles, folded it into a block of fudge, and then smashed me in the teeth with a hammer dusted in confectioners’ sugar.

I don’t know who this recipe was designed for. This is not something a human would enjoy eating or sharing with others. Maybe it’s meant as a strategic offensive maneuver in cookie form. Like, a co-worker invites you to a get-together and you don’t really want to go, so you bring a batch of Buttscoth Yummies to ensure you’ll never be invited to another.

Assuming there are any survivors.

As the saccharine venom devoured my molars and spiked my heart rate, I wondered if maybe this was a practical joke gone ironically wrong. Like, maybe when I was a kid I made up an intentionally gross concoction and slipped it into my mom’s recipe box to see if she’d fall for it and actually make some. Then she never did and we both forgot about it until she discovered the gag recipe and gave it back to me thirty-five years later. What if Past Marcus just totally punk’d Present Marcus?

I guess I’ll never know for sure. All I can say with certainty is that I’m hesitant to even post this recipe online for fear that someone else will accidentally make Buttscoth Yummies for themselves. I don’t want to be responsible for the suffering I could potentially cause. Because no rational person would intentionally detonate this kind of nutritional hand grenade inside their own body.

Then again, some people eat at Cheesecake Factory, so what do I know?